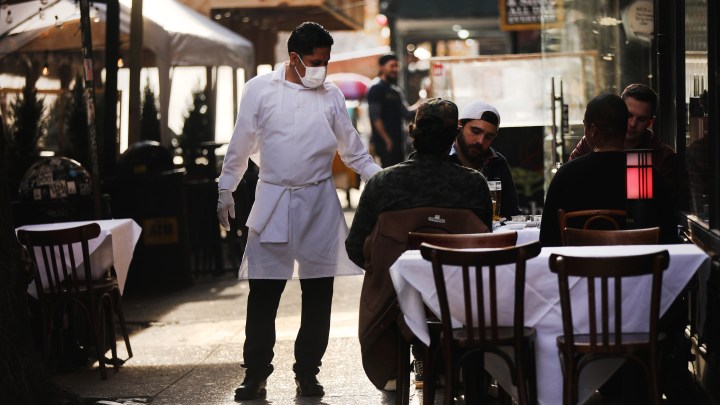 COPY
A restaurant employee moves between tables outside of a restaurant in Manhattan on Dec. 11 in New York City. Spencer Platt/Getty Images
COVID-19

A restaurant employee moves between tables outside of a restaurant in Manhattan on Dec. 11 in New York City. Spencer Platt/Getty Images
Listen Now

It’s a good bet that business owners of all stripes are eyeing the new Paycheck Protection Program money in Congress’ relief bill. But those same business owners haven’t forgotten that the first round of PPP money didn’t roll out so smoothly.

We checked in with some small business owners to talk about the pros and cons of applying for a PPP loan all over again.

The new Paycheck Protection Program that Congress is proposing would allow restaurants and hospitality businesses to take out bigger loans.

Mark Frier owns three restaurants in Vermont and said he’d like to spend more on supporting his staff during the difficult, colder months.

“We’re running in a deficit right now, just even trying to remain open and keep our employees on payroll,” he said.

Congress’ proposal would also make it easier for smaller loan borrowers to apply for forgiveness.

Sophie Blake owns a jewelry store in Virginia. She said it was a struggle to apply for her $14,000 PPP loan.

“There were about 20 to 30 pieces of documentation I had to submit,” she said. “I’m still waiting to hear back whether I’m going to get forgiven or not.”

Blake said her jewelry sales have been slow this holiday season, which is usually one of her busiest times. And next year, her rent is going up.

She said if her PPP loan isn’t forgiven, she probably won’t apply for another one.

“I don’t think I want to take on any more debt. You know, I already feel anxious with the debt that we have,” Blake said.

Some PPP recipients aren’t sure they need this second go-around. Jackie Laundon is a public health consultant based in Colorado.

“After the disastrous quarter two in the spring, I’m in a better position at the end of the year,” she said. “And so, I’m not sure. To be honest right now, I’m leaning toward no.”

Laundon said she’d like to think that by holding back, business owners who need a loan more than she does will have a better chance.