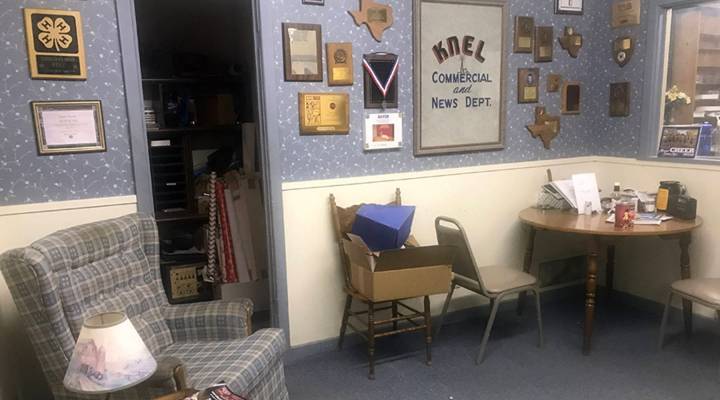 Long before Craigslist and eBay, there was tradio.

On “tradio,” a portmanteau of “trading” and “radio,” people buy and sell their gently or not-so-gently used goods by calling into a live radio show. You’d think maybe e-commerce would have made that pointless by now, but tradio is still a thing on radio stations from Kernville, California, to Brady, Texas.

“Good morning, everyone, and welcome to our trading on the radio program here at KNEL,” says host Tracy Pitcox, opening Brady’s Trading on the Radio show on a recent Friday morning.

Tracy Pitcox hosts “Trading on the Radio” every morning at 9 a.m. He’s been working at KNEL for 30 years.

He’s in his mid-40s, wearing a big belt buckle and rust-colored cowboy boots as he leans into the microphone.

“For the next 30 minutes, if you have something to buy, sell trade, swap or that you might need, we’ll try to help you out this morning on this edition of the program.”

The phones light up immediately. Pitcox answers them himself and pushes a few buttons to get a caller on the air.

“Yes, sir, I’ve got some hay for sale,” says a caller. “Five-by-five coastal rounds. Ninety-five dollars a bail, delivered.” The hay seller thanks Pitcox and hangs up. Pitcox repeats what he’s selling and the caller’s phone number and moves on. He knows there are a bunch of people who want to get their turn on the radio.

Pitcox has been working at KNEL for 30 years. He started hanging around the station when he was in high school. He said the station’s had a tradio show for as long as he can remember.

“Seventy-seven, ’78, something like that is when we started the program, but it wasn’t nothing new to us, we stole it from somebody else,” he said.

There’s no definitive history of tradio, but many believe that an appliance-store owner in Seguin, Texas, about a three-hour drive southeast of Brady, started the first tradio show in the 1950s. Initially, he bought air time to read notices of items for sale that customers had posted on a bulletin board inside his store. Then it just morphed into a radio program.

For some Brady residents tradio is appointment programming. John Campbell, who runs a cleaning and moving service, is a big fan and knows the show’s call-in number by heart. He’s about 6’2″ and as thick as a tree trunk. He said everybody in town calls him Big John. He’s wearing a camouflage hat with the nickname emblazoned in big, bright orange letters. Campbell’s bought and sold a lot of stuff on tradio for the last 28 years. He prefers it to buying and selling on the internet.

Big John Campbell has bought and sold a lot of stuff on KNEL’s “Trading on the Radio” over the last 28 years. He said he listens even when he doesn’t have anything to buy or sell. It’s kind of like his gossip column.

“Craigslist and those things, they kind of get messy sometimes,” Campbell said while taking a break from his job. Campbell said there’s something more personal about calling people after hearing their voices on the radio. He never misses a show, even if he’s not buying or selling, because he wants to know what people in town are up to. Tradio’s kind of his gossip column.

“It’s entertaining if you really just listen to it,” he said.

Tradio is entertaining. Some recent items offered for sale on tradio in Brady: billy goats, a 12-gauge shotgun and a John Deere backhoe. You never know what you’ll hear. Like when a woman called in to a recent edition of the show.

“I have two pair of gently-worn ostrich, Justin-made boots for sale. Both of them are a size 9,” she announced.

The caller was 85-year-old Lindell Smith. She lives in a 1950s ranch house on Brady Lake, just a few minutes from KNEL’s studio.

“My husband passed away in February and he had some boots,” Smith said from the entry of her house shortly after the tradio show is over for the day. “So I just called and this man that is here right now called me and asked if he could come try them on.”

Inside Smith’s house, a man sat at her big dining room table trying on the brown boots. His name is Curtiss Stroup. He’s 79.

Curtiss Stroup heard about some boots for sale on “Trading on the Radio.” He decided to buy both pair.

“I think I’m going to buy both pair,” he told Smith.

A little more than an hour after she had called in, Smith had sold her husband’s boots for $50 per pair.

There are so many stories on tradio every day. Sometimes listeners have to imagine the plot.

“Somebody called in and they had an old stagecoach one time,” Pitcox said. “I thought, ‘Why would you have a stagecoach?’” Pitcox laughed as he thought of all the crazy things he’s heard on the show.

There’s no telling how long buying and selling stuff on the radio will be around in the age of e-commerce. But long before eBay, Craigslist and Facebook Marketplace, people traded their goods on local radio stations.

Whether your town calls the shows tradio, “Swap Shop,” “Trading Post” or “Biz Baz,” it’s a staple of small-town life. Tradio shows have become a target of pranksters like radio broadcaster Howard Stern, but maybe that’s just cruel. Not only does tradio still serve a purpose, it’s a window into life in rural America. 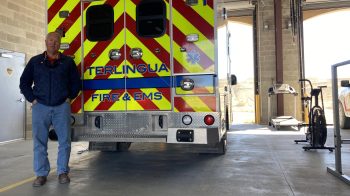