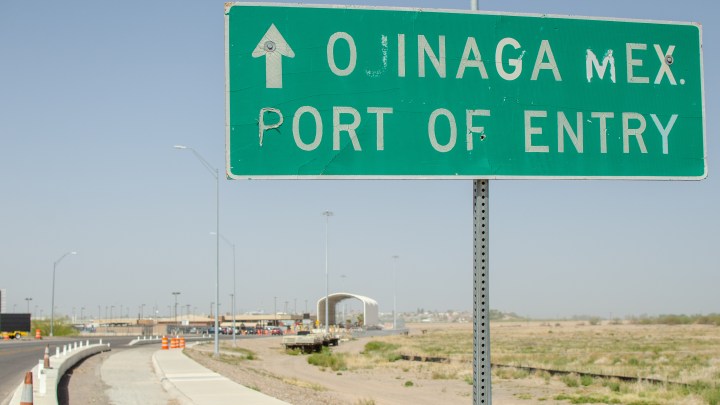 COPY
Since late March, the Presidio-Ojinaga port of entry has been open to transmigrantes, Central American drivers who travel through Mexico to their home countries to sell secondhand goods purchased in the United States. Carlos Morales/Marfa Public Radio

Since late March, the Presidio-Ojinaga port of entry has been open to transmigrantes, Central American drivers who travel through Mexico to their home countries to sell secondhand goods purchased in the United States. Carlos Morales/Marfa Public Radio
Listen Now

Standing outside the Presidio-Ojinaga port of entry, John Ferguson looks on as cross-border traffic trickles through the streets of Presidio, Texas.

Ferguson is the mayor of Presidio. He said his rural border town was picked as an additional port for “transmigrantes” because Mexican officials felt, among other things, that the current port in the South Texas city of Los Indios was being inundated with traffic.

Transmigrantes make their livings towing secondhand goods from the U.S. across the Mexican border to their home countries in the hope of selling those items for a profit there. Often, they drive beat-up pickup trucks filled to the brim with things like ladders, old bathroom scales, washing machines and even motorbikes. Since late March, Presidio has been open to transmigrantes and the loads they carry.

“They’re buying these vehicles in the United States,” Ferguson said. “And they buy also other types of merchandise.”

They bring their goods through Mexico to other countries, like Guatemala. Some are dual citizens of Guatemala and the U.S.

“Once they purchase all these things, they normally will have, like, a midsize Toyota pickup or something, and towing a second vehicle,” Ferguson said. “And that’s how you can always spot them.”

Bener Lopez works as a transmigrante. He would haul goods through West Texas before the pandemic.

“Here we have things we sell over there,” Lopez said in Spanish at that time, pointing to the bed of his truck. “Everything is secondhand.”

Along with the 1985 Toyota he was hauling, there were a few thousand dollars’ worth of goods in the truck. He said he’s done this kind of work for a few years and thanks God for the opportunity to provide for his family.

At one point, there were multiple ports of entry for transmigrantes along the Southwest border. But beginning in the early 2000s, transmigrantes were allowed only at Los Indios, where such crossings generally reach a few thousand per month.

During the pandemic, those numbers dropped but are now on the rebound, said Jared Hockema, the Los Indios city administrator.

“There are times that there’s a lot, there’s tons or there’s very few,” Hockema said. “But they’re all crossing, you know, throughout the year.”

That potentially means a lot of traffic for Presidio, a city of about 5,000. Mayor Ferguson said he’s concerned about how transmigrante traffic could impact daily life and the city’s only major highway, U.S. 67.

“It’s a two-lane, hilly road, and not many opportunities, not many passing lanes and, you know, just lots of places where people could get in trouble if they don’t drive prudently,” Ferguson said.

But others in Presidio, a city with few industries, see transmigrantes as a potential boon to the local economy.

“There’s going to be a wide range of opportunities for not only the brokers, but for other people,” said Presidio’s Isela Nuñez, an import-export broker who works with cross-border goods like machinery, cattle and vegetables.

She said her business is prepared to fill out the required paperwork for transmigrantes and the loads they carry, but is holding off on hiring new employees because it’s too early to know what the demand will be like.

“I think at the beginning, it’s going to be slow,” Nuñez said.

Other local businesses are ramping up. One built a paid parking lot near the border to accommodate transmigrante trucks. Another is bringing in mobile homes where transmigrantes can stay the night.

Mayor Ferguson isn’t sure what this might mean for the local economy.

“The transmigrante traffic will contribute somewhat to our local tax base through fuel sales, food sales, things of that nature,” he said. “But we’re not putting out our hopes that it’s going to be a gold mine for us.”

The new crossing opened in late March, but so far, transmigrante traffic is still largely going through Los Indios.