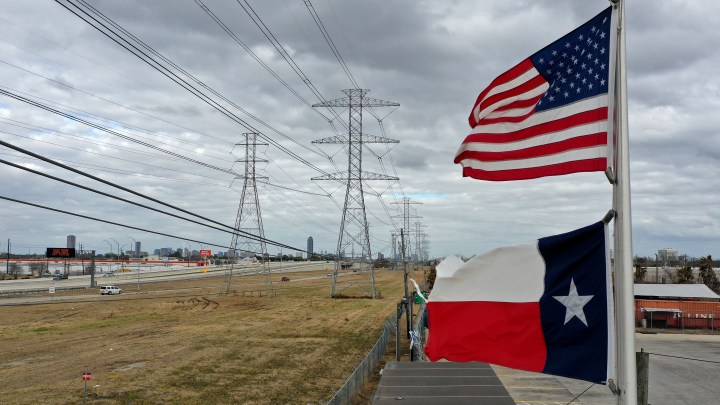 COPY
Dairy farmers had to dump 14 million gallons of milk because they couldn’t get it to processing plants. A lot of poultry farmers lost power for days and couldn’t get more fuel for their generators. Justin Sullivan/Getty Images

Dairy farmers had to dump 14 million gallons of milk because they couldn’t get it to processing plants. A lot of poultry farmers lost power for days and couldn’t get more fuel for their generators. Justin Sullivan/Getty Images
Listen Now

Weather has returned to normal in Texas — it was even sunny and 75 most of the week. But the state is still dealing with some interruptions in commerce from the Presidents’ Day freeze.

Grocery stores are getting restocked and many are almost back to normal, although some are still limiting the quantities of milk and eggs that people can buy. The freeze hit the agriculture industry hard. Preliminary estimates put the cost to Texas farmers and ranchers at hundreds of millions of dollars.

“We’re going to have a lot of farmers go bankrupt from this freeze,” said Sid Miller, Texas’ agriculture commissioner. He said farmers are on tight margins even without natural disasters and did what they could to prepare for the storms.

Miller said dairy farmers had to dump 14 million gallons of milk because they couldn’t get it to processing plants.

A lot of poultry farmers lost power for days and couldn’t get more fuel for their generators.

“The baby chicks that just hatched that are, you know, going to be on your store shelves in three months, a lot of them froze to death,” Miller said.

He said Texas might have to import from other places if there’s a shortage which would make milk, chicken and eggs more expensive at the grocery store. Stores can’t just immediately restock shelves because they don’t keep a lot of extra stock on hand.

“Inventory is expensive,” said Jim Luke, economics professor at Lansing Community College. “But, inventory is what buffers the unusual. It’s what allows you to handle the sudden peak in demand or the truck that doesn’t show up.”

Whether those shelves get restocked quickly also might depend on where someone lives in Texas. The shelves might be restocked in Austin or Houston, but that doesn’t mean stores in rural East Texas are full.

“How different stores and different communities were affected and the speed at which they get restocked, I think, is a really important issue for food security,” said David Anderson, an agricultural economist at Texas A&M University.

About a fifth of Texas’ counties are considered food deserts by the USDA.