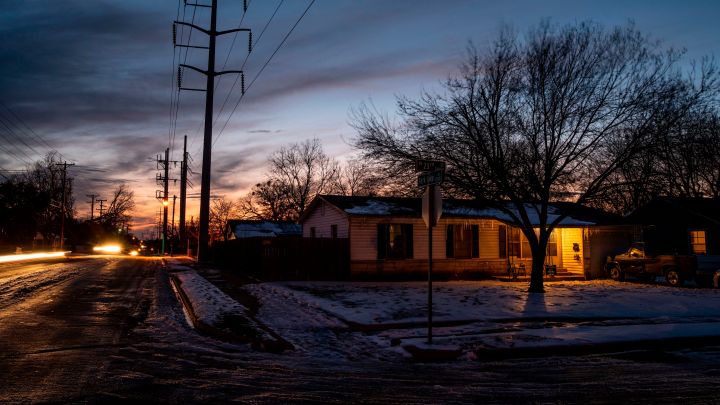 COPY
The state needs to be prepared to prevent extreme cold from paralyzing the electric power system. Matthew Busch/AFP via Getty Images

The state needs to be prepared to prevent extreme cold from paralyzing the electric power system. Matthew Busch/AFP via Getty Images
Listen Now

Gov. Greg Abbott said Wednesday that he would “mandate and fund the winterization of the Texas power infrastructure” to make sure the grid doesn’t fail again.

That will be no easy feat.

“What’s unique for us is we will have both really cold and really hot,” said Michael Webber, professor of mechanical engineering at the University of Texas at Austin.

He said the state has to be prepared for the more typical heat and also to prevent cold weather from freezing and breaking the infrastructure of electrical plants.

“That’s hard. Entirely solvable from an engineering perspective, but it could be more expensive,” Webber said.

He said the technology used to prevent freezing could make for less efficient generation in the summer.

The governor not only promised winterization of the Texas grid, he said the state would figure out a way to fund it.

Caitlin Smith, vice president at the energy consultancy AB Power Advisors, said the governor can mandate changes even though the market is largely deregulated, but power companies aren’t going to want to pay.

“There is no cost recovery for those generators that need to winterize,” she said.

Even if policymakers commit to invest in winterizing the grid, said Daniel Cohan, associate professor of environmental engineering at Rice University in Houston, that would address only one part of the problem folks encountered during the recent freeze.

“We have three systems that really failed each other this time,” Cohan said.

Electricity, gas and water. And he said the governor’s mandate only deals with the power problem.

“Our water systems weren’t prepared for losing power. Our gas systems went down and knocked out the gas supply to the power plants,” he said.

So far, the governor has not offered any specifics on who will end up paying, whether it’s taxpayers or ratepayers or some combination of both.