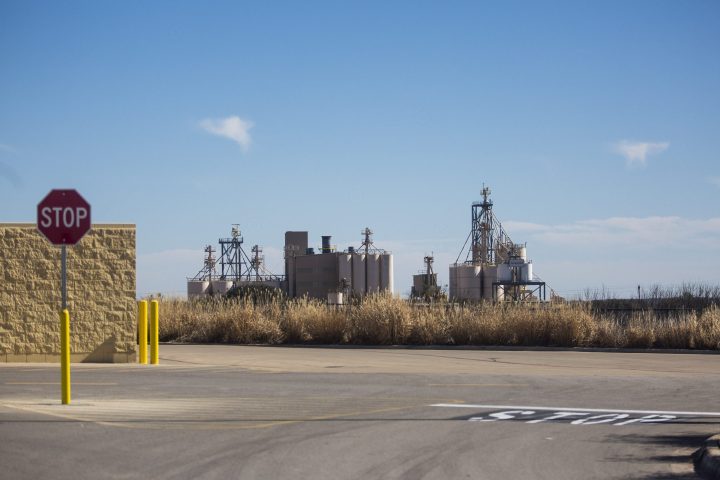 Ninety-year-old Louise Long sat down to enjoy a free burger with her girlfriends on a recent weekday afternoon at the Tractor Supply store in Brady, Texas. Long owns a real estate business in town and she keeps hearing about more layoffs at the sand mines, which has her worried.

“Those sand plants have been here for so long and so many people work for the sand plants. We’re going to suffer for it for a long time,” she said.

For about 60 years, the sandy soils of McCulloch County were the go-to source of sand for energy companies that needed it to get oil and gas out of the ground. But the market for McCulloch County sand has been drying up.

When the fracking boom hit the U.S. a couple of decades ago, with the Permian Basin in west Texas as ground zero, oil companies started using a lot more sand to blast oil and gas out of the ground. “Brady Brown,” as the sand had come to be known, was the standard. The grains of sand were strong, the right shape and held up under the extreme pressure of fracking.

But when oil prices dropped dramatically five years ago, companies had to figure out a way to cut costs. So they started testing Permian Basin sand, which they didn’t have to truck in from 200 miles away.

“I found the strength of it to be as good as the sand they have here,” said Rick Althof, a Brady resident who used to run quality control at a sand mine in town owned by oil company Pioneer Natural Resources. “Now, it wasn’t quite as round, but it’s obviously working or they wouldn’t be using it.”

These days, Pioneer harvests most of its sand in west Texas, saving hundreds of millions of dollars a year. The company used to employ hundreds of people in Brady but is currently down to just a skeleton crew. Pioneer says it will shut its Brady sand mine by the end of this month.

“The plant I was at closed on April 1,” said Ryan Adams. He was making about $80,000 a year as a plant manager at Cadre Proppant in Brady, where the median annual income is about $35,000. Adams quit his sand industry post in December to open a classic car restoration company. He said he saw the writing on the wall.

“They kept saying they were going to extend it for, you know, it might be July or we can run it another year and all this and I could just see through it,” he said.

Adams said the company offered him a $150,000 salary, plus bonuses, to move out to west Texas to run a sand plant there. He wasn’t interested, but that’s what a lot of people in Brady are doing — taking job transfers and spending half their time living away from their families in the Permian Basin.

The closure of the sand plants in Brady extends far beyond the mining industry.

Sherry Tally used to do the books for Texan Truck Wash, which cleaned 18-wheelers that hauled sand out of Brady. It had to close a few weeks ago.

“When you rely totally on truck traffic and you’ve got so many sand plants that have closed, we just couldn’t do it,” she said.

Tally has lived in Brady for more than 20 years and said she couldn’t imagine the sand industry not being a vital part of the town’s economy. She says a lot of people have had to cut back on spending.

“You don’t just go out to eat and everything all time, like you did,” she said. “I feel sorry for the merchants out here, but what do you do?”

She expects more businesses, especially retailers, will have to shut their doors soon.

Local officials are debating whether to offer tax incentives to lure other industries to Brady. Mayor Tony Groves wonders whether the town could rebrand itself as a hill country tourist destination — a place for a little R&R for people from Dallas and Houston.

“Instead of being a mining town, is there potential that Brady becomes the stress elimination center for this part of Texas?” Groves asked.