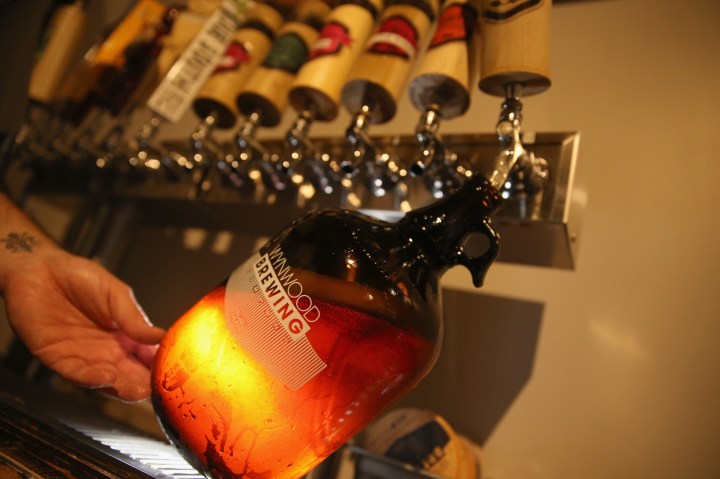 Buying in bulk: A growler of beer is filled at a Miami brewery. Joe Raedle/Getty Images
I've Always Wondered ...

Buying in bulk: A growler of beer is filled at a Miami brewery. Joe Raedle/Getty Images

Why are growlers of beer more expensive than a six pack of the same beer? I like the idea of not wasting resources on unneeded cans, bottles, labels, gas, machinery, etc. so I figured it would be cheaper to just fill up a reusable bottle. But I’ve found the opposite to be true: Local beers always seem to be more expensive by the ounce as compared to the packaged and shipped containers of the same.

When it comes to manufacturing, a good rule of thumb is that the bigger the package, the less it’ll cost you in the long run — all thanks to economies of scale. Buying bigger boxes of Kleenex, bottles of Coke and all those bulk items you find at Costco cost more upfront, but the price per unit is cheaper.

Yet beer growlers — containers that allow you to store large amounts of the alcoholic drink — generally seem to defy conventional wisdom and cost more than smaller, prepackaged cans.

In general, breweries have to price their products competitively at the supermarket, but not so much at the tap room, where people are there to enjoy the experience and are less concerned about the price, according to Jack Buffington, a professor of practice in supply chain management at the University of Denver.

For instance, at Temblor Brewing in Bakersfield, California, a six-pack of 12-ounce Kern County Premium lager costs $8.99, roughly 12 cents an ounce. But a 64-ounce growler of that same beer is $18, or about 28 cents an ounce.

Don Bynum, co-founder of Temblor Brewing, explained that when it comes to six-packs, the price is dictated by the market. “We don’t want to have different pricing than what retailers are charging for the same product down the street,” he said.

Bynum said the company has also made a big investment in its packaging. “The beer industry is built for big breweries, not for small ones,” he said. “Being a smaller brewery and trying to compete with those guys is pretty difficult.”

The reason why growlers are more expensive at Temblor is because the company wants consumers to purchase its cans instead.

Bynum said that the brewery does like filling growlers — it’s just that the economics of doing so is challenging.

The more growlers Temblor sells, Bynum added, the longer the lines at their restaurant because of the time it takes to fill one up. And that makes it difficult to retain customers.

There are also labor considerations. Those five minutes spent filling a growler could instead be spent helping three different groups order food and beers, he said.

In contrast, a brewery that has a tasting room where there’s a food truck outside will probably have an easier time filling growlers, Bynum added.

Another disadvantage of growlers, Bynum said, is the beer can degrade while sitting in the containers, affecting perceptions of the product’s quality.

“Oxygen is what destroys beer. So when you fill a growler — unless you have special machinery, which most breweries do not — you are adding oxygen to the beer,” he said. “And so for every hour or 30 minutes that beer is not consumed, it does change and deteriorate.”

Since most people probably aren’t drinking 64 ounces in one night, what happens is that you have a product sitting around in a less-than-ideal form. “That does damage to the brand, because they say, ‘This doesn’t taste good,’” he said.

Over at Fulbrook Ale Works in Richmond, Texas, it costs $12 to fill a 64-ounce growler with Red White & Brew lager, roughly 19 cents per ounce. A six-pack of 12-ounce cans is cheaper at $10, or nearly 14 cents per ounce.

Jeff Hajovsky, the owner of Fulbrook Ale Works, explained over email that his growlers are more expensive than the six-packs because they are supposed to be consumed off the premises. He said some patrons disregard the rule (knowingly or unknowingly) and “consume the growlers on the property like a pitcher of beer.”

“Since it is difficult to distinguish if a growler has been opened or not onsite by a customer, even if the top is taped, we just made the growler price (per ounce) the same as the on-premise pint price,” he continued.

As for why then the pint (about 19 cents an ounce) costs more than the six-pack, Hajovsky said that’s because pints are consumed at the restaurant where you have bartenders and entertainment — think TV, games and music. “Similarly, if you buy a drink at a sports arena or an amusement park, pricing is typically a bit higher,” he said. “[It’s] the price of enjoying the atmosphere versus at home.”