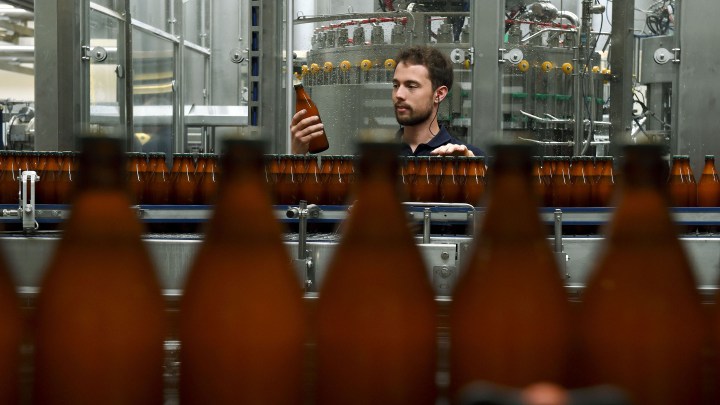 COPY
One thing that’s driving breweries to capture their own carbon dioxide is that right now some suppliers don’t want to bother with low-volume customers. Christof Stache/AFP via Getty Images
COVID-19

One thing that’s driving breweries to capture their own carbon dioxide is that right now some suppliers don’t want to bother with low-volume customers. Christof Stache/AFP via Getty Images
Listen Now

Beer makers buy a lot of carbon dioxide. They use it not only to add some fizz to your IPA, but also to purge tanks for cleaning and to transfer beer from tank to bottle.

Most carbon dioxide available for purchase is a byproduct of oil and gas production. But COVID-19 has depressed the price of oil and suffocated the demand for gasoline, so oil, gas and ethanol plants are making less carbon dioxide. Which is making the product more expensive for those who need it, breweries included.

Coincidentally, brewing actually produces a lot of carbon dioxide. But it’s expensive to capture so most brewers just release the gas into the atmosphere, contributing to pollution.

Amy George figured out that it doesn’t have to be that way.

“There are three steps of purification,” she said, pointing to a carbon capture machine at Austin Beerworks, a brewery on the north side of the Texas capital. The machine looks a bit like a hotel ice maker.

“The first are dryers that remove water. The second is an activated carbon vessel that removes impurities, and then the third is a chiller that takes that gas and converts it to a liquid,” George said.

Her company, Earthly Labs, sold this contraption to the brewery about a year ago.

“It was kind of always the holy grail of craft brewing was to be able to figure out how to reclaim the CO2 that we’re producing and be able to put it back into our beer,” said Adam DeBower, one of the co-founders and owners of Austin Beerworks.

DeBower said his company paid about $100,000 for the unit and its installation.

At Denver Beer Company, co-founder Patrick Crawford decided a carbon capture machine made sense there, too.

“I think we’ll see much smaller breweries and breweries our size, capturing their own CO2 and using it,” Crawford said.

One thing that’s driving breweries to capture their own carbon dioxide is that right now some suppliers don’t want to bother with low-volume customers.

“Everybody’s going to feel the pinch,” said Bob Pease, CEO of the Brewers Association, which represents small and independent American craft brewers. He said a carbon dioxide shortage might get worse before it gets better as bars and restaurants, big users of CO2, reopen.

Molson Coors and AB InBev will likely feel the pinch less so than craft breweries. Because of their scale, larger breweries have been repurposing their carbon dioxide for years.

What’s true for all brewers is that the ability to capture carbon dioxide provides only some of what beer makers need to use, so they currently still have to buy carbon dioxide on the open market.