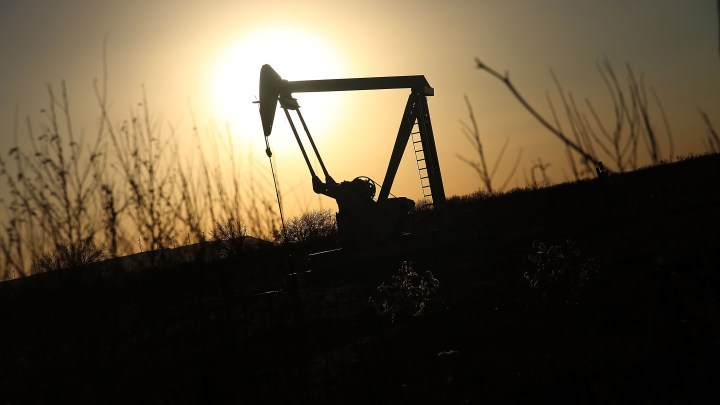 The price of crude oil fell through the floor over the last day to the point that wholesale oil was free for the taking. Actually, it was more than free.

“I literally have to find someone who can take the oil from me. And I have to pay them to do that, as opposed to somebody who wants the oil and they would pay me,” said Amy Myers Jaffe, senior fellow for energy and the environment at the Council on Foreign Relations.

It’s like some sort of unloved, broken-down junk car you pay to have towed off to the junkyard. To understand how oil can have a negative price — it was -$34 dollars a barrel for a moment yesterday — you have to understand that futures markets like this are not just an abstraction — not just computer data being traded back and forth. The price is for real barrels of blue-brown, gooey oil set for delivery next month.

And people who have the oil can’t find buyers because there’s just too much of it following the Saudi-Russia price war and plummeting demand for fuel given the pandemic. It’s to the point, Jaffe said, that producers are running out any place to put the overflow.

“I have to put more and more oil into storage. And at some point I might physically run out of places to put the oil,” she said.

“You see it in other commodity markets, where farmers, for instance, will dump milk into the ground because they can’t sell it,” said energy economist Philip Verleger. “Well, oil producers can’t do that.”

But why can’t producers just turn off the faucets on their oil wells?

“The concern is that sometimes when you open the wells back up, they don’t produce at the same rate,” said Verleger, who was a senior adviser during the administration of President Jimmy Carter.

To boost prices, the oil producers cartel OPEC, Russia and the U.S. did begrudgingly agree to cut production earlier this month, by about 10 million barrels a day. But, clearly given this negative price, it wasn’t enough.

“They need to go to 25 million barrels a day,” Verleger said.

But many aren’t sure that will happen.

“Markets really haven’t believed that there is the political will behind the recent agreement from OPEC and OPEC+ to cut production,” the Wilson Center’s Duncan Wood said. “And because of that, I think we’ve seen this continued slide in the price of oil.”

Tuesday morning the weirdness continued with crude oil for month-of-May delivery listed as up 100% — to 10 cents a barrel.

When will the price of oil really find its footing? Analysts say when the economy rebounds from coronavirus.