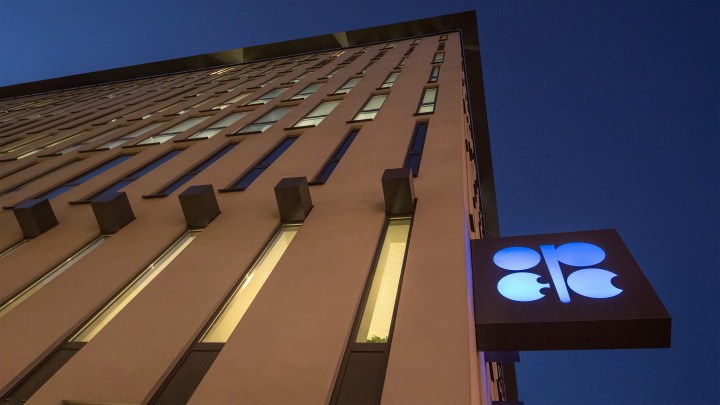 Since the first outbreak of the new coronavirus, oil prices have fallen more than 20%.

Today at an OPEC meeting in Vienna there was talk that OPEC and Russia might together cut the world’s supply of oil by one million barrels a day. Prices rose. Then, the Russians walked out of the meeting. Prices fell.

That’s a familiar drama, according to Bob McNally, founder of Rapidan Energy Group.

“There’s the old expression in Washington,” he said. “Make ’em sad, make ’em glad. And I think what you saw today is with the Russians leaving the meeting is positioning to, maybe, surprise the market.” The surprise would be a bigger cut than expected, to bring prices up.

There is some evidence that energy use in China has bottomed out and is coming back. Ports are busy, traffic has returned and pollution levels have gone up.

“Now, that’s overall a bad thing for mankind,” said Florian Thaler, who heads the analytics company OilX. “But what we are looking for is whether the industrial activity has started to pick up. Indeed, there has been a soft improvement.”

But in the U.S., oil use is sagging. It could sag more, said analyst Jacques Rousseau at ClearView Energy Partners.

“If they start canceling sporting events and conferences and such, this starts to add into less transportation fuels that’ll be consumed — both gasoline and jet fuel,” he said.

For now, OPEC and Russia are focused on Friday, when they could have a deal to respond to what some are calling an oil demand emergency.