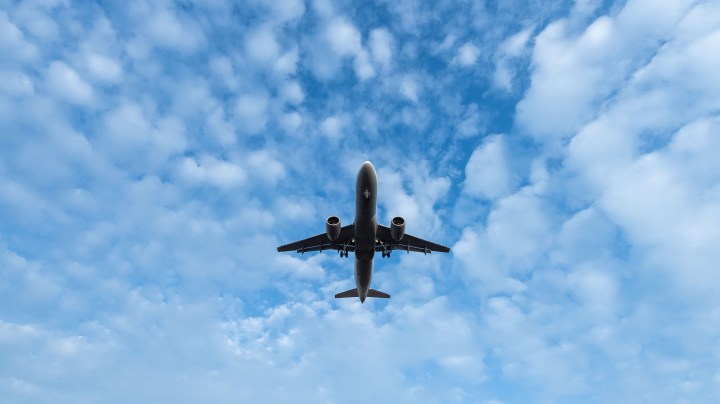 COPY
A group of companies is testing the viability of a “no-carbon” jet fuel at the Hague Airport. Above, a plane flies over Germany in 2018. Silas Stein/DPA/AFP via Getty Images

A group of companies is testing the viability of a “no-carbon” jet fuel at the Hague Airport. Above, a plane flies over Germany in 2018. Silas Stein/DPA/AFP via Getty Images
Listen Now

The aviation industry is committed to cutting its greenhouse gas emissions by at least half by the middle of the century. But with those emissions already set to double over the next decade or so, it faces a daunting task.

At Rotterdam The Hague Airport, where a consortium of companies is testing the commercial viability of a new “no-carbon” jet fuel, help might be at hand.

“We would like to kick start a fundamental change in aviation,” said Willem van Genugten, director of a Dutch company Urban Crossovers, part of the Rotterdam consortium.

“We want to facilitate synthetic fuel made from CO2, taken from the air,” van Genugten said.

By deriving its main component from the air, Van Genugten said, the new fuel would be “limitless”.

The fuel is a kind of kerosene, made from passing electricity through a mixture of carbon dioxide and water. So far, only small amounts of the liquid have been created in a lab, but the aim is to scale up production in a special facility to be built next to the airport. A Swiss environmental company, Climeworks, will supply the CO2.

Climeworks claims to be the first to capture the gas from ambient air in order to sell it, or to remove it forever from the atmosphere by burying it.

At a site not far from its headquarters in Zurich, Climeworks operates dozens of  high-tech machines that suck in the air and then filter out and collect the carbon dioxide. Communications manager Louise Charles says  use of ambient carbon dioxide to fuel aircraft will ensure that in future the impact of aviation on climate change will be minimal.

“By using CO2 that’s in the air already we do not release additional CO2 in the atmosphere. We’re using what’s there already,” she said.

Oskar Meijerink, project lead at SkyNRG, another company in the Rotterdam consortium, added that no carbon needed to be emitted in the manufacture of the new fuel.

“If you produce the electricity in a sustainable manner using renewable energy sources, then the whole system can be carbon neutral,” he said.

Meijerink expects that the new fuel will initially be much more expensive than fossil fuels but that the cost will come down when production can be scaled up, which could take between five and seven years.

But according to one critic of the project, scaling up presents a major problem.

Jorien de Lege of Friends of the Earth in the Netherlands says the plant the consortium is building will only make 1,000 liters of the new fuel a day — a laughably inadequate amount, she says, since a jet will consume 1,000 liters in five minutes of flying. More broadly, de Lege doubts the availability of sufficient supplies of sustainable electricity.

“We have 225,000 flights a day. This planet is not big enough to put all the extra wind and solar power in place to produce fuel for 225,000 flights a day,” she said. De Lege said she welcomes any innovation that aims to mitigate climate change but she does not consider “flying on air” a solution and believes the only feasible option is flying less.

The Rotterdam consortium insists that we can fly guilt-free, without causing climate change; that technology’s improving by leaps and bounds; and that the whole business of carbon reduction is becoming more viable by the day.