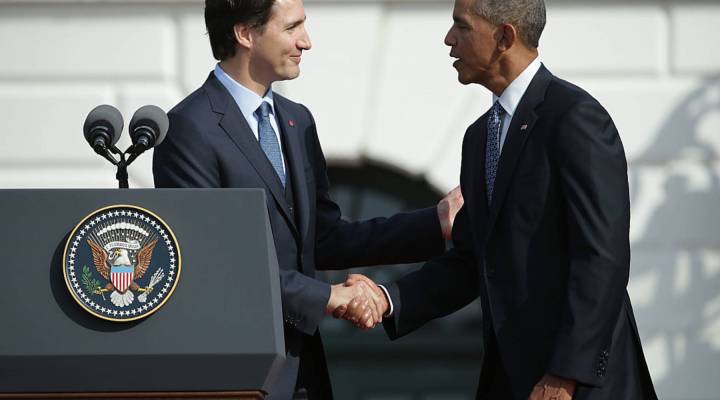 In Washington, the leaders of Canada and the United States pledged to collaborate on cutting global warming emissions across North America. The key is not just carbon dioxide, but also a potent greenhouse gas known as methane.

By one estimate, 25 percent of today’s warming comes from methane. The gas doesn’t live in the atmosphere as long as carbon dioxide, but in the short term it’s some 80 times worse.

Methane leaks out during various stages of the oil and gas process: drilling, storage, even transport.

The Environmental Defense Fund has collaborated with industry to try to measure fugitive methane emissions. One study focused on North Texas.

“Measured emissions were 90 percent higher than what was otherwise reported in the official inventory,” said EDF vice president for climate and energy Mark Brownstein. “This is a problem much bigger than either government or industry has been thinking.”

Many companies are addressing methane emissions, including Statoil from Norway. Company officials have given several reasons, including safety, cost and public relations.

“Our number one priority is keeping our workers safe,” Nathaniel Teti, Statoil’s vice president for communications, development and production, told the industry conference IHS CERAWeek. “But we also look at this as a cost issue. This is certainly a public perception issue, when you wrap it in the broader climate change debate.”

But there are thousands of drillers. And a couple bad leakers – known as super-emitters — can really add up. The Environmental Protection Agency will now draft methane emission regulations. Already, industry groups have deemed new rules costly and unnecessary.

In the end, one issue at stake is the promise of natural gas. It is a fossil fuel, but emits far fewer warming gas than coal – that is, if natural gas producers can control their methane emissions.

“Natural gas can be an important lever to take dirty coal plants off line,” said Stanford environmental scientist Rob Jackson. “The benefits for that include greenhouse gases and pollutants that kill people.”