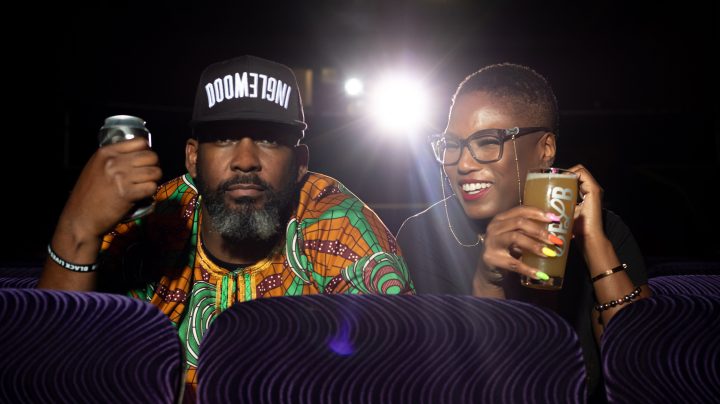 COPY
Teo Hunter, left, and Beny Ashburn, the founders of Crowns & Hops Brewing. Said Hunter: "Our goal was always to give something beautiful, something that was indicative of Black and brown excellence, to the community." Courtesy Beny Ashburn

Teo Hunter, left, and Beny Ashburn, the founders of Crowns & Hops Brewing. Said Hunter: "Our goal was always to give something beautiful, something that was indicative of Black and brown excellence, to the community." Courtesy Beny Ashburn
Listen Now

Aluminum prices hit a 13-year high this week due to a rise in energy costs, continuing the surge in the metal’s price this year. Aluminum is used in a range of products, including smartphones, power lines and canned goods like soup, soda and beer.

“Marketplace” host Kai Ryssdal checked in with Teo Hunter, co-founder and chief operating officer of Inglewood, California-based Crowns & Hops Brewing Co., about how business has been recently. The following is an edited transcript of their conversation.

Kai Ryssdal: We went out to Inglewood and did a little interview standup out on the street out there about August of 2020. What has been going on since, as you’re trying to get this company off the ground?

Teo Hunter: Oh, wow. So much has happened. I think then we were still in the process of identifying a place where we would actually call home. Since then, we finally decided on a property. And we’re happy to announce that Crowns Inglewood will start construction in about the next few weeks.

Ryssdal: That’s good. So how close is that to the new football stadium for the Rams and the Chargers?

Hunter: Oh, it’s walking distance. We’re really excited to be what, to many, would be on the opposite side of where most of the development is happening. Our goal was always to give something beautiful, something that was indicative of Black and brown excellence, to the community. And that’s what Crowns Inglewood will represent. So we’re really excited about our location.

Ryssdal: Talk to me about that thing you mentioned there almost in passing, but it’s so core to what you and this company are trying to do: bring attention to brown and Black entrepreneurs and the businesses they build as service to the community. You’re really intentional about that.

Hunter: Absolutely. I mean, it’s intentional even in every one of our beers. You know, this month we rerelease our 8 Trill Pils beer, which is a Pilsner that we actually dedicate to accomplishing racial equity. You know, again, if you consider the disparities of Black-owned businesses in craft beer, out of the 9,000 breweries that are in this country, less than 1% are Black-owned — that means less than 60. And of those 60, less than half of those have their own facilities. So we’re excited to be a case study to what it means to be accomplishing racial equity, as well as being a resource for the community because ultimately that’s what Crowns Inglewood will be: a community space, a public house.

Ryssdal: In the truest sense of the word, right back to the word “pub,” right, in “public.”

Hunter: There it is, you nailed it.

Ryssdal: All of that said, though, you’ve got to run a business and aluminum prices are up. I mean, carbon dioxide prices are up, for crying out loud, in this pandemic. That has to be having a hit to your bottom line.

Hunter: It’s hitting everybody. It’s unfortunate that some of the suppliers have even pulled contracts from some of the smaller groups, and we’re really forced to go through brokers to get the very supplies that we need. So it’s a pretty painful experience, but I think our community is really showing up — regardless of the price maybe being a dollar higher — still going out there and supporting Crowns & Hops beer.

Ryssdal: I don’t want that to go by unnoticed. Small companies are getting squeezed by the big companies in times of supply shortages. That’s what you’re saying?

Hunter: Absolutely. It’s undeniable that the larger corporations who traditionally have larger purchase orders for aluminum are going to get the preference. Smaller organizations, people that contract like us, are unfortunately having to go through brokers in order to get the same supplies at a much higher rate. It’s tough.

Ryssdal: Yeah. So let me ask the downer of a question: Is there any doubt in your mind that you’re going to make it? I mean, you’ve made it through this pandemic, you’ve got a lease signed and you’re going to start construction. But are you safe, I guess, is the question.

Hunter: I don’t know if any entrepreneurs subscribe to the concept of “safe.” But what I will say is, is one of the things we’ve been fortunate to do, we just launched an equity crowdfunding campaign. And the goal is to be able to have this space, so that regardless of what those supplies are and what’s available, that we can still pour a glass. And right now, we’re on track to do that.