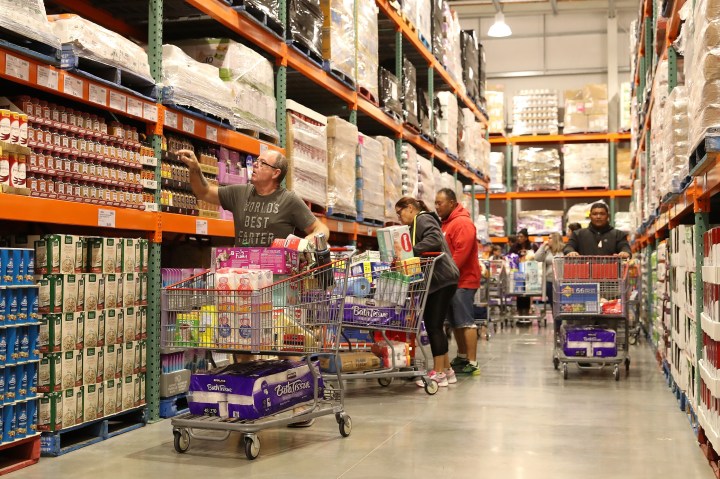 Shoppers walk the aisles of a Costco. Bulk buying can help your budget if you can afford the upfront costs, though it can also depend on the item and the size of your household. Paul Kane/Getty Images
I've Always Wondered ...

Shoppers walk the aisles of a Costco. Bulk buying can help your budget if you can afford the upfront costs, though it can also depend on the item and the size of your household. Paul Kane/Getty Images

Do warehouse clubs (i.e. Costco, Sam’s, BJ’s) cost you more than you save? I run a high school kitchen and if my monthly inventory is high (dollar-wise) it impacts my finances negatively. Wouldn’t purchasing and storing bulk items also negatively affect my household finances?

When Sarah Boling was raising five kids as a single mom, she remembers being unable to buy common household goods in bulk because she didn’t have enough cash on hand.

That meant purchasing, say, a four-pack of toilet paper for a couple of dollars versus a 16-pack that cost more but would last a lot longer.

“With all those kids, you know, toilet paper, paper towels — all of that, you go through that stuff pretty quickly,” said Boling, who resides in Inverness, Florida. “So it would have helped if I would have been able to buy large quantities.”

Now that she has a more stable salary and is married, living in a two-income household has allowed her to buy in bulk at Sam’s Club, obtaining household cleaning items and paper products along with nonperishable food items like spices. She said she saves hundreds every year.

Boling’s past experience reflects the “poverty penalty” — a phenomenon in which lower-income consumers actually pay more than rich people.

Low-income households tend to buy smaller packages from cheaper brands. That undermines their efforts to save money because the unit price is higher than that of items sold in bulk, according to a 2016 working paper from University of Michigan professor Yesim Orhun and Mike Palazzolo, a Ph.D. student at the time.

Their data showed that when low-income households buy toilet paper, for example, they pay 5.5% more per roll than if they had done their purchasing the way high-income households do. Those households buy in bulk and take advantage of sales more often. Those less well-off households not only lack the upfront cash, but they don’t have the space to keep extra items in storage, so they can’t wait for products to go on sale.

The study also showed that they do take advantage of bulk discounts and sales when they have more liquidity.

“I was definitely aware that I was basically spending more money than I should have had to spend,” Boling said. “I’ve been pretty poor for most of my life, and I was a single mom for a long time. So basically, you have to get whatever is cheapest.”

Nicole Dow, a senior writer at The Penny Hoarder who focuses on saving and budgeting strategies, said that shoppers at warehouse clubs can usually see price breakdowns that help them make smarter decisions.

“When you’re looking in the store, you’ll see the store will actually mark out the price per unit,” Dow said. “And you can use that to compare. Because there are times where you might find that the item that you usually shop for is better to buy as a single item rather than a bulk item.”

She also noted that while bulk food tends to have a lower price per unit, you have to make sure you can consume it before the expiration date.

Echoing that point, Kara Grant, an assistant professor of economics at Missouri Western State University, pointed out that the size of your family factors into how advantageous these deals are in the long run. Buying items like fresh produce in bulk, for example, may not be the best option for smaller households.

For nonperishable items, Dow suggested that you could split the cost with a roommate or friend.

Shopping at warehouse clubs, such as Costco, Sam’s and BJ’s, also requires a membership fee between $55 and $120 a year, depending on which tier you’re purchasing. Boling pointed out, though, that warehouse club memberships are another thing low-income consumers usually can’t afford to buy upfront.

One tip Dow offered is finding someone, like a neighbor, who has a membership and can pick up an item for you. You could then reimburse them for that purchase.

“If you’re only going shopping once every month, or not really making the most of that purchase, it may not be a good deal for you to shop at those stores,” Dow said. “But you still can buy in bulk at your everyday grocery stores.”

Nancy Wong, a professor of consumer science at the University of Wisconsin-Madison, said she stopped shopping at Costco because she felt like she was losing money.

“I remember buying things like guacamole,” she said, laughing. “I realized that I could only make a dent in the quantity. I ended up throwing out the rest.”

There are lifestyle characteristics, which are easily taken for granted, that go along with the ability to shop at stores like these. For example, you need to have a car and a house with the storage space to accommodate these items, Wong said.

Costco is “clearly targeting a particular segment of the market,” she explained.

The typical Costco shopper is a 39-year-old Asian American woman who earns more than $125,000 a year, according to data from the analytics firm Numerator provided to Insider. The big-box retail chain attracts a richer clientele than stores like Walmart — hence its luxury offerings.

The University of Michigan’s Orhun said that to help address the costs that come with the inability to buy in bulk, retailers could provide low-interest credit lines or manufacturers could offer promotions.

“There are ways to save money if you have money,” Boling noted. “And you can’t do that if you don’t have any money.”