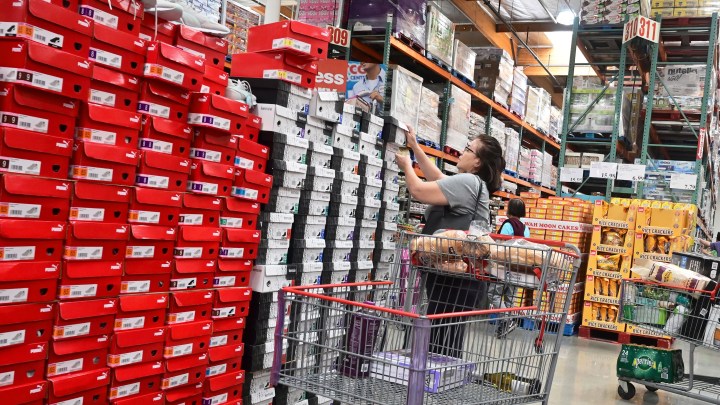 COPY
A shopper at a Costco store in Alhambra, California in August 2019. Costco and other stores are once again limiting the number of water bottles, cleaning products and paper supplies that customers can purchase. Frederic J. Brown/AFP via Getty Images

A shopper at a Costco store in Alhambra, California in August 2019. Costco and other stores are once again limiting the number of water bottles, cleaning products and paper supplies that customers can purchase. Frederic J. Brown/AFP via Getty Images
Listen Now

Once again, there’s a limit to how much toilet paper you can buy at many Costco stores. But this time, the culprit is supply chain disruption, which has prompted Costco and other retailers to restrict purchases on things like bottled water, paper towels and cleaning products.

Limits on how much consumers can buy can backfire for retailers, however. When there was a run on certain products in the early pandemic days, the explanation was simple.

“Consumers freaked out,” said Ken Boyer, who studies operations management at The Ohio State University. “And people heard there’s gonna be a shortage. So they went to buy more.”

Shortages now are much more about shipping delays and other supply chain strains. Take toilet paper, Boyer said. Even if it’s manufactured in the U.S., the chemicals to manufacture it might come from overseas.

“But if those chemicals are coming from, say, China or Thailand or India, and they’re sitting on a boat offshore, that becomes a delay to the toilet paper manufacturers,” he said.

Sometimes shortages affect packaging or containers, like cans for soda or bottles for water. When Melbourne, Florida-based Ally Stranz saw a sign that said “limit two” on cases of water, “My first thought was hurricane,” she said.

But Stranz checked her phone — no hurricane warnings. After seeing the sign, though, she wanted to stock up on water. She bought two cases and had her son buy two. “Because is there gonna be a run on water?” Stranz asked.

That’s why product limits can be a bit tricky for stores.

“Once we realize goods are scarce, they become more valuable to us,” said Jeremy Burke, a behavioral economist with the University of Southern California. Those limits can trigger consumers, Burke said.

“I might not [need] the toilet paper right now. But I know toilet paper is scarce. So I may go stock up on it as much as I can at the moment,” Burke said.