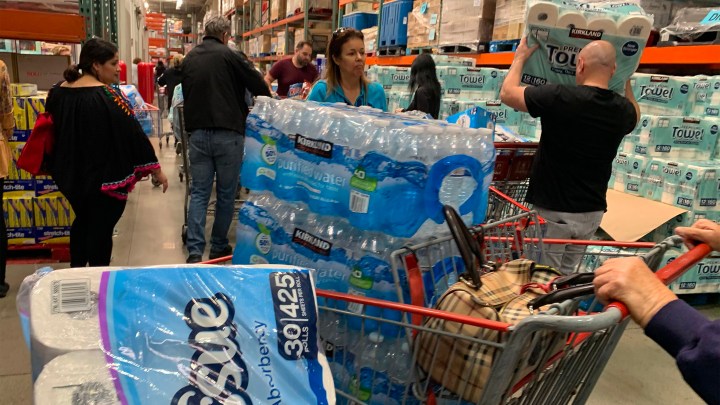 COPY
Is it fear of a coronavirus quarantine or just scarcity that's driving these Costco customers in Burbank, California, to stock up on toilet paper, paper towels and water on March 6? Robyn Beck/AFP via Getty Images
COVID-19

Is it fear of a coronavirus quarantine or just scarcity that's driving these Costco customers in Burbank, California, to stock up on toilet paper, paper towels and water on March 6? Robyn Beck/AFP via Getty Images
Listen Now

Every few months, Danielle DeSantis and her husband Robert go to a local Costco near Denver to stock up on things like meat, peanut butter and toilet paper. But when they went the other day?

“There was no toilet paper,” she said. “There was no paper towels. And a woman came up and asked, ‘What about napkins? Are there napkins?’ and the Costco employee just laughed at her.”

A friend told her that Home Depot, which apparently sells toilet paper, was still in stock. They bought a 12-pack of Charmin.

“And still, I was like, ‘But maybe I need more.’ And my husband, thank God, is the more pragmatic of the two of us and was like, ‘Danielle, 12 rolls will get you through 14 days of quarantine and many more. Stop it.'”

DeSantis walked into the Costco a calm, collected consumer. And she walked out ready to stockpile toilet paper in her basement.

There is a rational reason that people are buying staple items like toilet paper at a time like this. They worry that soon they might not be able to get to the store or the store might be closed. But you probably don’t need a year’s supply.

And the impulse to overbuy, which DeSantis had when she looked at those empty shelves, has a lot to do with the economic concept of scarcity.

“Scarcity is a really powerful driver of consumption,” said Adam Alter, who teaches marketing and psychology at the New York University Stern School of Business.

Alter said when you go to the store and see that there’s no toilet paper left, that signals that a product is in short supply.

“If I can find it somewhere, I should buy more of it than usual, because there’s a chance that other people will be buying in the same way and there’ll be less and less of it,” he said. “This is the kind of snowball effect.”

Which can lead to even more panic buying.

Now, this is true of all kinds of products. So why toilet paper in particular? Alter says it’s considered a basic hygiene item in the United States, and people don’t really want to think about what it would be like to go without it.