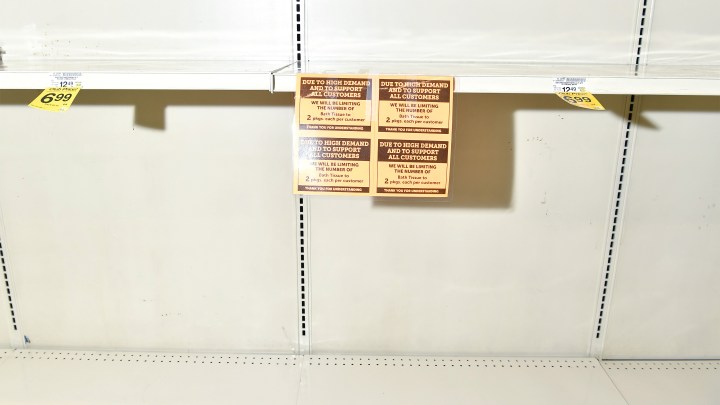 COPY
Empty shelves have become a common sight at grocery stores across the U.S. during the COVID-19 pandemic. Amy Sussman/Getty Images
COVID-19

Empty shelves have become a common sight at grocery stores across the U.S. during the COVID-19 pandemic. Amy Sussman/Getty Images
Listen Now

If you’ve been to the grocery store lately (and we remind you that you should only go if you have to), you might have seen some empty aisles. Rice, pasta, flour and toilet paper have been tough to find for some.

Before COVID-19, when we went to the supermarket we were used to seeing shelves jam-packed.

“The reality is that stuff is flying off the shelf. It’s an extremely efficient, tightly controlled or run supply chain,” he said.

When we’re talking about toilet paper, the problem is that so many of us have been told to stay home.

“What’s called the retail product, which is what we use in our home, is a very different product than what is typically used in what’s called the away from home market. Businesses, corporations, factories, hospitals,” Luke said.

Commercial toilet paper often comes in bigger rolls that wouldn’t easily fit in a home bathroom. It starts with a different kind of wood pulp, is packaged differently and it’s delivered through a separate transportation network.

“All you need is, in a supply chain like this one, short-term shock that happens for two or three days and it takes a long time for the supply chain to work its way back to a stage where everything is back to normal,” said Sunil Chopra, professor of operations management at Northwestern University.

These supply chain complications aren’t just affecting the toilet paper aisle in your grocery store, though.

Shelie Miller, director of the environment and sustainability program at the University of Michigan, said food companies have to adjust to the new reality, too. They’re selling a whole lot less product to restaurants these days.

“Under normal circumstances, we spend about half of our food dollars eating outside of the home. Over the past few weeks, we’ve transitioned drastically to consuming most of our food inside the house. And that’s actually put a lot of strain on supply chains,” Miller said.

Meat suppliers, for instance, sell in bulk to restaurants but to single families in grocery stores.

“So unless there’s a way to change the wholesale supply chain, there’s just going to be a mismatch there until the supply chain is able to keep up and catch up with the changing demands,” she said.

Miller said it’s getting a little easier to get your hands on foods that were in short supply just a few weeks ago, though, because manufacturers have shifted things around.

As for toilet paper, it’s hard to know when supplies will normalize, but consulting firm NCSolutions said demand has softened since the middle of last month, which could make it easier to pick up a couple of rolls next time you’re at the store.