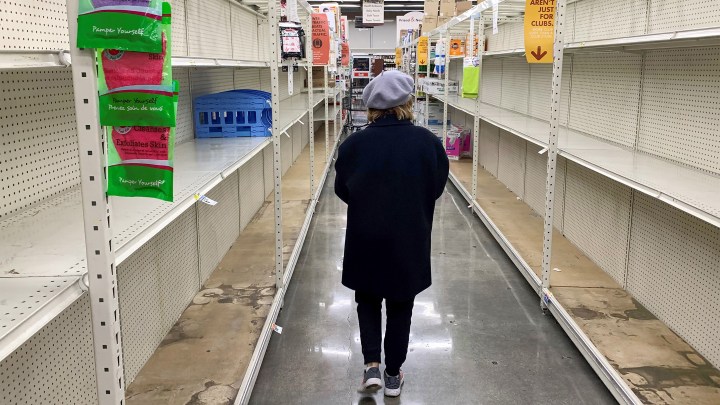 COVID-19 has consumers clearing out grocery stores’ stock of pasta, rice and toilet paper. That has some grocers scrambling to keep up with demand.

Abel Almonte is feeling conflicted about the empty shelves at his grocery store in Queens.

“It’s fair to say that yes, we’re happy with the increase in business, but at the same time it’s kind of difficult keeping it stocked,” Almonte said. He gets truck deliveries twice a week, and the last one was missing almost a third of what he ordered. To keep shelves full, he goes shopping. He bought rubbing alcohol from a medical supply store.

“I’ve even had to buy some cases of stuff from Walmart,” Almonte said. “That’s how bad it’s gotten.”

Almonte and Walmart have different supply chains. Almonte uses a middleman. It means a can of soup goes from a factory to a third-party distribution warehouse to his store. Walmart has more than 150 of its own distribution centers.

“Self-distribution works brilliantly, particularly in crises,” said Burt Flickinger, managing director at Strategic Resource Group. “Like Albertsons, like Kroger, like BJs, like Costco. They all can go from one truck a day to several trucks a day, seven days a week, and restock the stores around the clock.”

Big stores have 24/7 access to inventory and their own fleet of trucks. And Ananth Iyer, who teaches operations management at Purdue University, said they have something else the little guys lack: lots of cash.

COVID-19 Why are people stockpiling toilet paper?
Listen READ MORE
Check Your Balance ™️ What to do when the markets plummet and you’re nearing retirement
READ MORE

“But if you’re a small player, do you have the financial wherewithal to go get the supply ahead of the demand?” Iyer said.

If Almonte in Queens has to keep using Walmart to stock his shelves, it’s going to eat into his profits. But he said he’s not going raise prices. He hopes that keeps people coming to his store instead of competitors down the street.