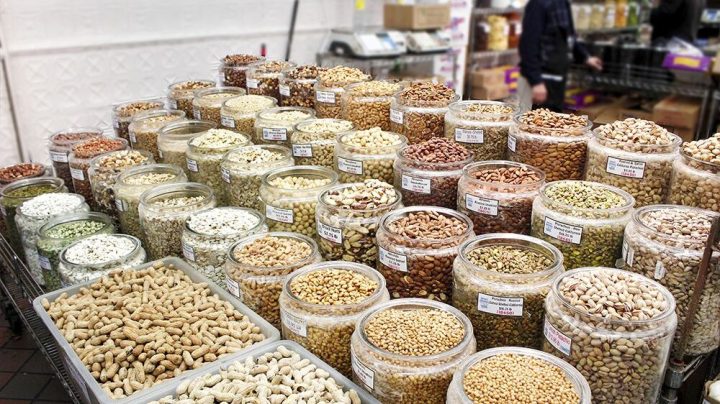 COPY
Bulk goods at Sahadi's grocery store in Brooklyn. The store has adapted quickly to the run on groceries during the coronavirus lockdown. Sahadi's
COVID-19

Bulk goods at Sahadi's grocery store in Brooklyn. The store has adapted quickly to the run on groceries during the coronavirus lockdown. Sahadi's
Listen Now

Grocers of all sizes have been scrambling to keep up with demand throughout the coronavirus crisis. Now, many smaller stores and grocers that cater to specific communities are relying on their biggest advantage to keep their shelves stocked: flexibility.

Imagine a rope running from a grocery store shelf to a food manufacturer. That rope is the grocery store supply chain, and in a time like this, it’s important for that rope to have slack.

“In times of crisis, tight breaks,” said Pat Whelan, who runs the warehouse for the Brooklyn-based grocer Sahadi’s. It specializes in Mediterranean foods, including preserved lemons from Morocco, tahini from Lebanon, Halloumi cheese from Cypress.

The flexibility to quickly swap out suppliers is one definition of “slack” in a supply chain. When one of Sahadi’s longtime suppliers of Jordan almonds shut down a few weeks back, Whelan managed to find a new source over a weekend.

“People don’t really care, as long as they are able to get a product,” Duong said. “There’s no such thing as brand loyalty now.”

While smaller grocers have a lot of options, they don’t have the negotiating clout of a Walmart or a big grocer. And in normal times, that puts the small grocers at a competitive disadvantage.

“Supply chains that have excess inventory aren’t nearly as efficient in regular times,” said Dale Rogers, a professor of supply chain management at Arizona State University. “But in strange times like what we’re in now, [smaller grocers] actually are better positioned to respond.”

It works as long as demand is predictable. But when demand shoots up, the system can falter.

“When there’s a big run on things like Campbell’s soup, they have a hard time keeping up with that demand because of how much we’ve tightened supply chains down over the last 25 years,” Rogers said.

Smaller food suppliers have a similar advantage when demand increases: they can ramp up production faster than their big competitors.

Vallarta Supermarkets, which has 50 Latino-focused stores throughout Southern California, has been turning to local suppliers to keep its shelves stocked. In recent weeks, those have included a local juice manufacturer and paper products company.

“Being local, being in touch with your community, and what their needs are from a day-in, day-out basis, just makes you a lot better suited to react to something like this,” said Andrew Lewis, an executive with the chain.

Each of Vallarta’s stores manufactures its own tortillas. Lewis says the chain’s been ramping up production to meet customer demand. 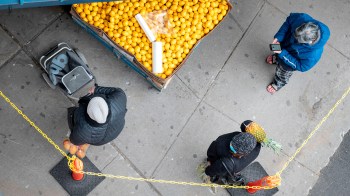