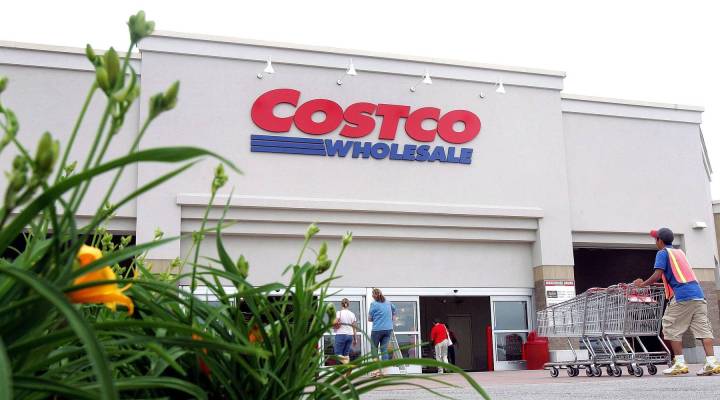 When I shop at Costco, I saw they sell $20,000 diamond rings and $17,000 bottles of 60-year-old whiskey. Why do they sell stuff like that at Costco (which is a discount wholesaler)? I mean, if you’re in the market for an uber luxury item, would you really get it at Costco?

Many people go to Costco to stock up on items like water, Tide laundry detergent, chips and toilet paper (its best-selling product), but the warehouse club also sells items such as designer handbags, home theater packages, caviar and expensive jewelry. Why? To distinguish itself from the competition and attract a wider range of customers, according to Alexander Chernev, a professor of marketing at the Kellogg School of Management at Northwestern University.

“From Costco’s perspective, having high end items helps differentiate the store from really low price stores like Walmart,” explained Chernev. “Walmart would not carry expensive luxury items on a regular basis because Walmart has to worry about the price image of Walmart, which is always the lowest price.”

The competition: Costco vs. Walmart?

The warehouse clubs and supercenters industry brought in $456.8 billion in sales last year, according to analysis by IBISWorld. Out of the 18 companies in the industry, Walmart has the largest market share at 71.7 percent while Costco comes in second with 18.8 percent.

However, the two have a very different business model and customer base. Walmart offers a variety of items in different categories and uses a promise of low prices to bring in customers. For years, its slogan was “always low prices” until it was replaced by “save money, live better” back in 2007. Walmart also owns Sam’s Club, which more closely resembles Costco than a regular Walmart store. However, earlier this year Walmart announced that it would close 63 of its Sam’s Club locations — about 10 percent of its stores.

While Walmart is focused on getting the lowest price and having a variety of items, Costco provides just one item in each category — one brand of cough syrup, one brand of detergent, one brand of orange juice. This strategy gives it an upper hand when it comes to picking items for its store.

“If you’re a retailer the size of Costco, lots of companies and lots of manufacturers and producers are offering you different things,” explained Chernev. “You have a lots of choice in what to sell and you also have a lot of power when it comes to setting prices.”

By buying large quantities of each item, Costco gets good deals on better quality items and passes those deals on to their customers, Chernev said. According to CNBC, Costco never marks-up any item more than 15 percent.

“Why do people shop at Costco? Bulk is not the main reason,” Chernev said. “The main reason is getting a better price for quality items. Buying in bulk is kind of the compromise. This is what you need to do to get the better price.”

And while those who are better off can afford to pay more for certain items that does not mean that they do not love a deal — especially one on quality items.

The customers: Who shops where?

“If you look at the parking lot in front of Costco, you see lots of luxury cars in there,” Chernev pointed out. Both Walmart and Costco have diverse customer bases, but Costco’s upper end of the range is higher than at a store like Walmart, he said.

Average Costco members have an annual income of $100,000, are college educated and own homes. An average Walmart shopper has an annual household income of $53,125, according to consulting firm Kantar Retail.

Since Costco attracts a richer clientele that can afford those expensive items such as caviar, old whiskeys and jewelry, it then makes sense to stock up on such items. As Chevner pointed out, if those items did not sell, Costco would stop carrying them.

There is a particular group of devoted Costco customers — referred to as “Costcoholics” by Forbes — who are often on the lookout for the latest luxury items to hit the shelves at Costco. These items tend to be seasonal and often sell out fast.

“Costco has an assortment of items, which is very interesting,” Chernev said. “Half of the assortment is permanent. They are things that they always carry, like laundry detergent and some of their own items that people expect to find. But they also have the seasonal items, which some people describe as treasure hunting. You don’t know what you’re going to find but it will be something seasonal and it will be a well-known prestigious brand or a well established, quality brand.”

The Boston Globe reported that as much as 20 percent of Costco’s merchandise is limited quantity.

“Costco has long used the term “treasure hunt” to explain why up to a fifth of its stock is limited quantity items kept in stores for as little as a week. Sometimes it’s seasonal items, such as margarita machines in summer. Often it’s surprisingly trendy, such as bargain-priced Hunter rain boots,” according to the 2011 article.