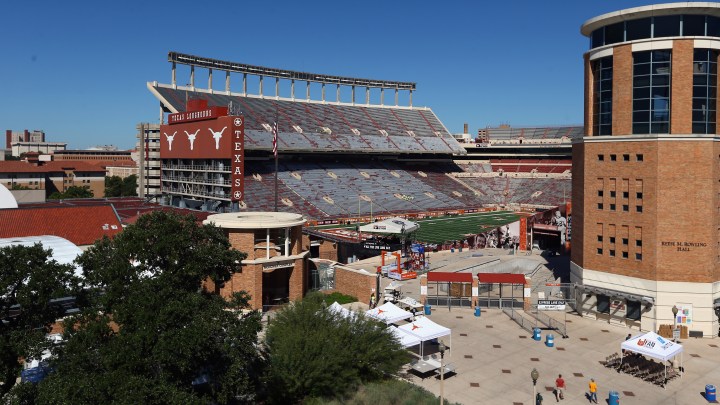 COPY
Eventually, schools that earn a lot of money from football — like the University of Texas — may have to put athletes on their payrolls.  Ronald Martinez/Getty Images

Eventually, schools that earn a lot of money from football — like the University of Texas — may have to put athletes on their payrolls.  Ronald Martinez/Getty Images
Listen Now

The college football season kicks off Saturday, and, as we know, there’s a lot of money being thrown around as those “amateur” athletes take the field. We got news this week that Nick Saban signed a nearly $100 million deal to coach Alabama until he’s in his late 70s, and last week the Big Ten inked a TV deal said to be worth billions.

This all has some athletes wondering if there’s going to be any revenue sharing now that they can make money off their name, image and likeness. When the NCAA allowed that, it was like opening Pandora’s box, said Patrick Rishe at Washington University in St. Louis.

“It only seems to me a matter of time where you will find college athletics feel pressured to give the student athletes a cut of the media revenues.”

Currently, athletes basically make money through endorsements. That keeps colleges and universities removed from any employment responsibilities, per David Berri, an economics professor at Southern Utah University. But he said that doesn’t reflect reality.

“The athletes are employees. They are hired, they are given a job — the job of an athlete takes precedence over anything else they’re doing,” Berri said. “If that’s the rule, you’re an employee. Your job is to play sports.”

Berri thinks that eventually, colleges will have to put athletes on their payrolls. Big schools like Alabama and Texas are preparing for how to make that work right now, said Ellen Zavian at George Washington University.

“They’re already having that conversation,” she said. “And perhaps some of the larger sports like basketball, football, will spin off into for-profit entities, remove themselves from the umbrella of the NCAA and not have those regulations as a restraint.”

Because, she added, the NCAA doesn’t want to get involved with directly paying players. But if the NCAA wasn’t around, that might make things easier for the multibillion-dollar college football and basketball industries.