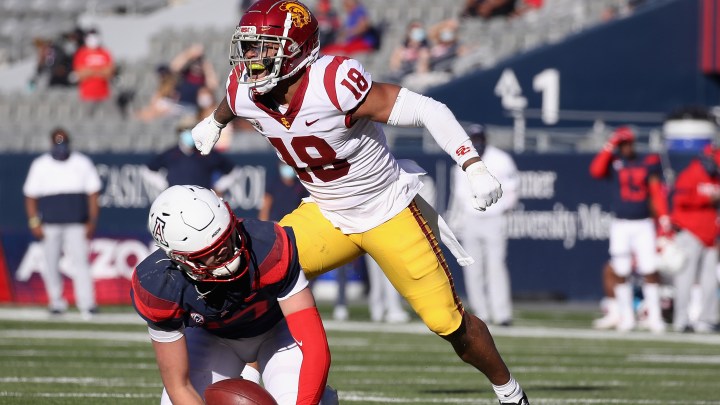 COPY
A USC Trojan celebrates a sack of the ASU Wildcat quarterback in a nearly empty stadium on Nov. 14. Christian Petersen/Getty Images
COVID-19

A USC Trojan celebrates a sack of the ASU Wildcat quarterback in a nearly empty stadium on Nov. 14. Christian Petersen/Getty Images
Listen Now

With ticket sales at college football and men’s basketball games limited due to the pandemic, many college athletics departments are struggling.

“You can take a look at that various universities that have been cutting sports as evidence of that,” said John Ourand, reporter at the Sports Business Journal.

Stanford said this summer it would discontinue 11 varsity sports. The University of Iowa cut men’s and women’s tennis teams. And many athletics departments around the country are facing pay cuts, furloughs and job losses.

As a result, athletics departments are looking for new revenue streams —like marketing partnerships with gambling companies.

“I think if you’re an athletic director, you’re saying to yourself, look, there’s too much revenue here to be made,” said Patrick Rishe, director of the sports business program at Washington University in St. Louis.

In September, The University of Colorado, Boulder, signed a five-year marketing partnership with PointsBet, an Australian company that runs an app and website for betting on games.

PointsBet gets to put up signs in Colorado’s sports arenas and place media ads. The school gets about $1.5 million.

While coaches and players aren’t permitted to bet on games, some experts worry that deals with gambling companies will harm others on campus.

“Even if the NCAA prohibits student athletes and staff from gambling, the widespread negative effects cannot be contained,” said Heather Lyke, the director of athletics at the University of Pittsburgh, when she testified before the Senate Judiciary Committee in July.

Lyke warned of gambling addiction among college students as well as the potential for corruption and game fixing.

But according to John Holden, assistant professor at Oklahoma State University, betting apps are good at sussing out suspicious activities and shutting them down. And nobody stands to win in that scenario, anyway.

“These schools, the NCAA, the sportsbook operators, they all have the same interest in seeing that the games are played with the utmost integrity,” Holden said. “So really these partnerships, they really tend to make a lot of sense.”

Although the University of Colorado isn’t the first school to partner with a gambling company, Ourand thinks this could be the beginning of a wider trend of schools seeking out partnerships like it to fill the gap.

“I expect that you’re going to see a lot of colleges in the markets where betting has been legalized start to try to bring in what is millions of dollars of potential sponsorship opportunities from these betting companies,” he said.