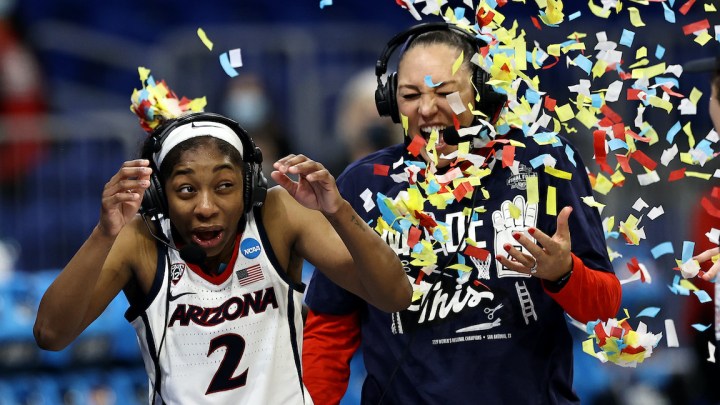 COPY
Aari McDonald (left) and head coach Adia Barnes of the Arizona Wildcats are showered with confetti after beating the Indiana Hoosiers and advancing to the Final Four of the NCAA Women's Division I Basketball Tournament. Elsa/Getty Images

Aari McDonald (left) and head coach Adia Barnes of the Arizona Wildcats are showered with confetti after beating the Indiana Hoosiers and advancing to the Final Four of the NCAA Women's Division I Basketball Tournament. Elsa/Getty Images
Listen Now

We’re nearing the end of the men’s and women’s Division I college basketball tournaments, otherwise known as March Madness. It’s the NCAA’s most profitable event. Some think it’s rather appropriate that at the same time, the U.S. Supreme Court Wednesday heard arguments about whether the rule that college athletes don’t get paid is legal.

Under current rules, student-athletes can’t be paid and the scholarship money can only be as much as it costs to go to that school.

Michael Carrier is an antitrust lawyer at Rutgers University. He filed an amicus brief on behalf of a group of professors supporting a lower court’s decision that the NCAA’s rules violate anti-monopoly laws. Carrier said at the center of this case is the issue of fairness.

After some states passed laws allowing students to take endorsement money, the NCAA said it would allow players to make some cash from third parties using their name, image and likeness.

There are also currently multiple bills in Congress that would create federal rules for student-athlete compensation.

“You can’t have student-athletes in California being able to get a certain amount, and ones in New York, Ohio, Texas, different ones. It’s just not workable,” said Matt Mitten, executive director of the National Sports Law Institute at Marquette University.

The NCAA has long argued that schools paying student athletes will compromise the focus on education and will also tilt the competitive balance toward those colleges with the deepest pockets.

But Ellen Zavian, a sports attorney in Washington, D.C., said the NCAA has a tougher time making the argument that they’re prioritizing the student-athlete’s best interest after the pandemic.

“I really believe the NCAA pushing the envelope for student-athletes to play in games, it sort of put the business ahead of the safety of the athlete,” she said. “Are they student-athletes, or are they athlete-students?”

The Supreme Court ruling is expected in late June, but Liz Mullen at the Sports Business Journal said whatever the court decides, the overall issue of student-athlete payment is coming to a head.

“Nobody really knows how this is going to come down, but everyone agrees there’s going to be a big change,” she said.

And for some student-athletes, including those participating in this weekend’s Final Four, some who have been using the hashtag #NotNCAAProperty, that change is a long time coming.