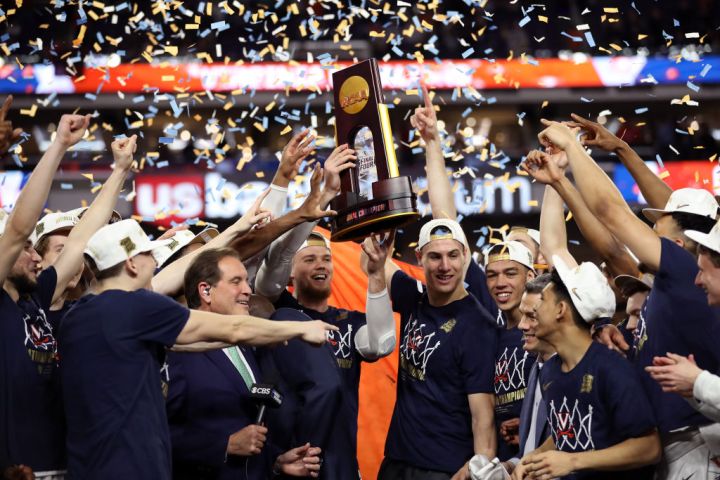 The Virginia Cavaliers celebrate with the trophy after their 85-77 win over the Texas Tech Red Raiders during the 2019 NCAA men's Final Four National Championship game at U.S. Bank Stadium on April 08, 2019 in Minneapolis, Minnesota. Streeter Lecka/Getty Images

The Virginia Cavaliers celebrate with the trophy after their 85-77 win over the Texas Tech Red Raiders during the 2019 NCAA men's Final Four National Championship game at U.S. Bank Stadium on April 08, 2019 in Minneapolis, Minnesota. Streeter Lecka/Getty Images

The 100-year-old orthodoxy holding up the big business of college sports is facing a new challenge.

A California law passed in September bans schools in the state from keeping student athletes from hiring agents or accepting advertising deals. It’s a direct affront to the NCAA, which created those rules in the first place, but has shown signs of lifting them.

The NCAA itself is a billion-dollar business, and the call to give student athletes a piece of that revenue has gotten louder in recent years.

On this week’s “Make Me Smart,” we’re talking with former UCLA gymnast Katelyn Ohashi about it. After her perfect-10 floor routine went viral last year, she’s speaking out about NCAA restrictions about the money she can make from her talents.

But paying college athletes is a complicated issue dating back to the first Roosevelt administration, so here’s a refresher with everything you need to know.

What is the NCAA? Why do we need it?

Its full name is the National Collegiate Athletic Association, and it’s the administrative authority on college sports at 1,117 colleges and universities, large and small. The NCAA sets eligibility criteria for student athletes, maintains official rules of play, regulates recruitment, awards championships and so on. In short, it’s the administrator of a business that brings in $995 million a year.

The NCAA’s been around for a long time. President Teddy Roosevelt is often credited with establishing the group to regulate college football.

It was a different game in the late 1800s, even more brutal than the game we watch today. Because games were big moneymakers, the pressure to win led some schools to cheat, and others abolished the game entirely.

But Roosevelt thought football built character, so he held a meeting at the White House with the presidents of Harvard, Yale and Princeton universities to establish some rules. The meeting didn’t directly produce the NCAA, but college presidents decided with proper rules and enforcement, football could be reinstated. The Intercollegiate Athletic Association became the new organization to enforce the rules. And in 1910, the organization changed its name to the one we know today.

So it’s basically like the National Football League or the National Basketball Association, but for college sports?

Well, this is where things get contentious. The NCAA is a tax-exempt governing body similar to the NBA and NFL, but those leagues have players unions that negotiate on behalf of the athletes. Since college sports are ostensibly extracurricular activities, student athletes aren’t represented in the same way.

When some college football players at Northwestern University tried to unionize in 2015, the National Labor Relations Board, the federal organization responsible for organizing labor unions, unanimously declined to classify the student athletes as employees.

The NCAA agreed with the decision.

“This attempt to turn student athletes into employees undermines the purpose of college: an education,” Donald Remy, then the NCAA chief legal officer, wrote at the time. “Student athletes are not employees, and their participation in college sports is voluntary.”

Is that what people talk about when they bring up “amateurism”?

In the eyes of the NCAA, any payment would make a college athlete a “professional” and would disallow that athlete from competing in college athletics. But the definition of NCAA “amateurism” has changed as players have sued the NCAA for compensation. As amateurs, college athletes are allowed to receive scholarships for their time and effort, along with and expense allowance for things like travel, equipment, health care, facilities and other “reasonable” costs. They can also get meals covered by their schools, but that’s been its own controversy.

So what’s the problem?

The NCAA and its proponents say further compensating athletes not only ruins the purity of the sport, but ruins equality on campus. Critics say the very idea of “amateurism” is a myth and that, specifically with men’s basketball and football, the revenue generated by these sports for the NCAA, universities, broadcasters and everyone else is due to the student athletes’ labor, so they should be compensated.

Then there’s the issue of players’ names and likenesses. The idea of college athletes making money off their actual playing came into the public consciousness in 2014, when former UCLA basketball star Ed O’Bannon took the NCAA to court over a popular series of licensed college basketball video games.

That antitrust case ended in a sort of stalemate but made the NCAA vulnerable to more challenges around amateurism and its restrictions on players’ income. Roger Noll, an emeritus professor at Stanford University, said at the time: “The NCAA is a cartel that creates a price-fixing agreement among the member schools and among the student athletes.”

How does Title IX fit into this? Do you risk creating more inequality in college sports when basketball and football players, mostly men, make more money than, say, swimmers?

That’s certainly an argument amateurism proponents are making. But you could also argue that the right to make money on your name, image and likeness gives women and athletes who compete in smaller sports (like gymnastics) to profit from what they’re spending enormous amounts of time doing in college. There’s no question that a running back for the University of Alabama is going to make more money from an image and likeness than a women’s field hockey player at Ithaca College, but it doesn’t seem that this is going to make sports any more unequal.

What exactly did the NCAA do last month?

The NCAA did a lot of suggesting. The NCAA didn’t do a lot of deciding. In September, California passed a law allowing student athletes to get professional representation and make money from endorsement deals and the like. The NCAA followed up by saying an exploratory committee had recommended the association open itself up to something similar nationwide. But what that “something similar” will end up looking like is anybody’s guess at this point.

The language in the announcement makes it clear that the NCAA doesn’t fully know where this is headed. There are tons of caveats and bullets in the announcement, so you have to wonder if this is a Pandora’s box situation for the NCAA.

Your guess is as good as ours. What we do know is that the NCAA is giving this exploratory committee until April 2020 to monitor legislative proposals and gather feedback from outside experts. The NCAA has given its three divisions until January 2021 to come up with any new rules on athletes being compensated for their name, image and likeness.