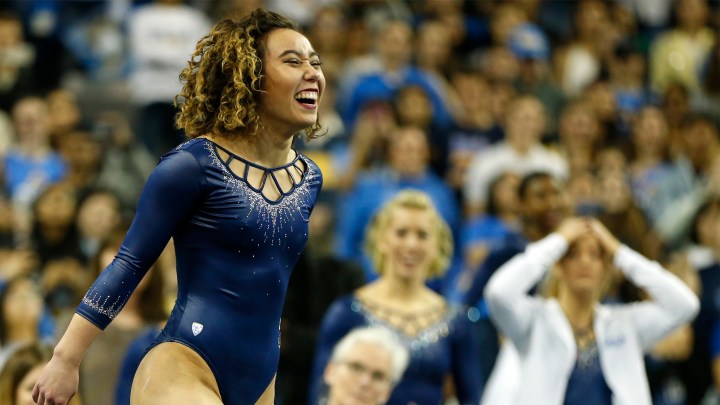 COPY
Katelyn Ohashi of UCLA competes in the floor exercise during a meet against Stanford at Pauley Pavilion in March 2019 in Los Angeles, California. Katharine Lotze/Getty Images

Katelyn Ohashi of UCLA competes in the floor exercise during a meet against Stanford at Pauley Pavilion in March 2019 in Los Angeles, California. Katharine Lotze/Getty Images
Listen Now

During her senior year at UCLA, gymnast Katelyn Ohashi posted one of her floor routines on YouTube. Before she knew it, the jubilant performance grabbed over 100 million views.

The New York Times published a video featuring Ohashi, “Everyone Made Money Off My NCAA Career, Except Me.”

“I was handcuffed by the NCAA rules that prevented me from deriving any benefit from my own name and likeness, regardless of the fact that after my final meet, I had no pro league to join,” Ohashi said.

Ohashi had to turn down a book deal and speaking engagements to preserve the amateur status that allowed her to stay on scholarship.

“Katelyn Ohashi was not going to go on and become a multimillion dollar professional gymnast,” said Kavitha Davidson, sportswriter and podcast host for the sports website, The Athletic.

“Her successors should be able to make money off of the fact that people are paying attention to them because they’re really good at a sport and they happen to be doing that sport in college,” Davidson said.

The argument that college players deserve a slice of the multibillion dollar NCAA revenue pie is at the heart of a new California law.

“I honestly believe that they were not going to make this specific announcement if it weren’t for the fact that the state of California had passed legislation saying that by 2023, we’re going to let the athletes and our state receive name image and likeness endorsements,” said Patrick Rishe, director the sports business program at Washington University in St. Louis.

The NCAA had to do something, but it’s still unclear exactly how things are going to play out.

One thing the NCAA is unequivocal about is that colleges won’t be paying players directly. No way. No how. Any money players earn is going to come from the Nikes, Under Armours and YouTube TVs of the world.

Scott Rosner with the sports management program at Columbia University said the NCAA bent but it didn’t break. Because, ultimately, the organization still gets to define what it means to be a college athlete as opposed to a pro.

“In the end, that determination of what that clear line of demarcation is, is to be determined by that very body, the NCAA,” Rosner said.

Some argue this rule is only going to benefit football and men’s basketball stars because those sports generate the most revenue.

But Davidson at The Athletic said other athletes will probably be able to cash in.

But there will be plenty of student athletes who are not marketable, for whatever reason. Those kids probably won’t see a dime.