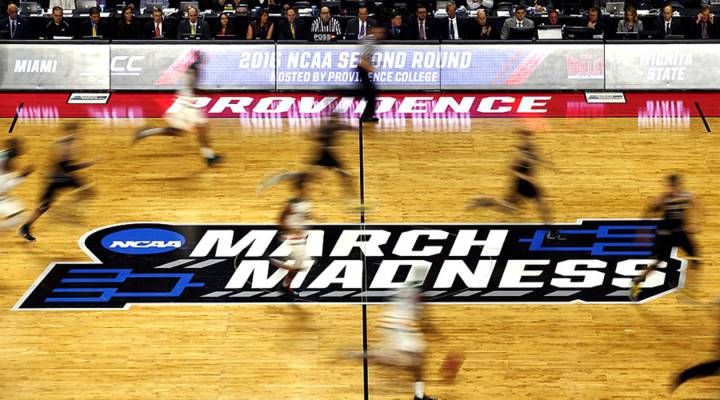 COPY
A general view as the Miami Hurricanes face the Wichita State Shockers during the second round of the 2016 NCAA Men's Basketball Tournament at Dunkin' Donuts Center on March 19, 2016 in Providence, Rhode Island.  Tim Bradbury/Getty Images

A general view as the Miami Hurricanes face the Wichita State Shockers during the second round of the 2016 NCAA Men's Basketball Tournament at Dunkin' Donuts Center on March 19, 2016 in Providence, Rhode Island.  Tim Bradbury/Getty Images
Listen Now

March Madness — the college men’s basketball tournament — is underway. And that means office pools, brackets, and lots of betting. The American Gaming Association estimates that Americans will bet $10 billion on the tournament, much of it illegally as sports betting is not legal in most U.S. states.

It’s hard to say exactly how much money, in total, is spent on illegal sports bets every year. The AGA puts it at $150 billion.

What is clear? States want a piece of that pool, so they can tax it.

“This is so much untapped revenue that the states are losing,” said Thomas Cooke, a professor at Georgetown University’s McDonough School of Business.

More than a dozen states, including New York and West Virginia, have proposed laws to legalize sports gambling, but a 1992 law confining it mostly to Nevada stands in the way.

A New Jersey casino gambling case before the Supreme Court could change that.

“If New Jersey wins the case then it would essentially open the door for these other states to become active in statewide sports betting,” said Jeremi Duru, a professor at American University’s Washington College of Law.

The Supreme Court is expected to rule within the next couple of weeks. By then, you should know if your bracket is a winner.