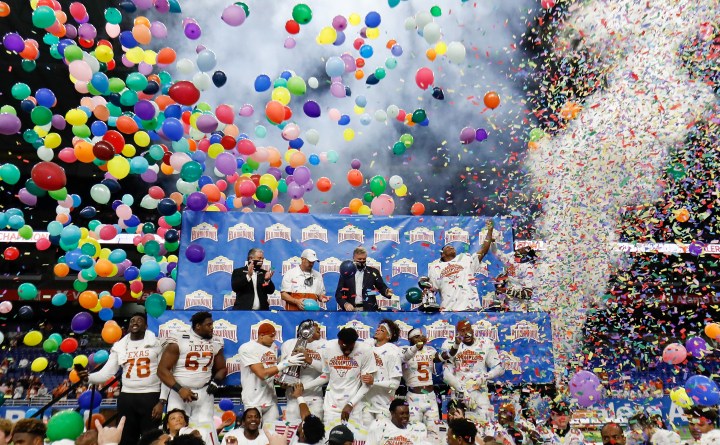 COPY
The Texas Longhorns, the biggest moneymaker in college football, celebrate during a trophy presentation at the Alamodome in San Antonio. The team plans to leave the Big 12 to join the Southeastern Conference. Tim Warner via Getty Images

The Texas Longhorns, the biggest moneymaker in college football, celebrate during a trophy presentation at the Alamodome in San Antonio. The team plans to leave the Big 12 to join the Southeastern Conference. Tim Warner via Getty Images
Listen Now

For a while now, the business of big-money college sports — mainly football and men’s basketball — was pretty predictable and stable. The NCAA made the rules, conferences and schools cashed the checks and players got scholarships.

But that structure is unraveling.

Players have been winning the right to earn money in some ways. And in June, the Supreme Court struck a blow against the NCAA’s ability to make rules when it unanimously decided that the organization is subject to antitrust law. Justice Brett Kavanaugh wrote that its business practices would be “flatly illegal in almost any other industry.”

On the face of it, student athletes have been the big winners at this point in the challenge to college sports’ status quo.

So far, 24 states have legislation on the books allowing players to make money off their names, images and likenesses, or NIL.

There’s no national policy, but the NCAA has said it won’t penalize any athlete, no matter what state they play in, who sells their NIL rights.

As a result, those athletes will be looking to go to schools that give them the most exposure.

And colleges are using their leverage to give the best athletes what they want, according to Patrick Rishe, director of the sports business program at Washington University in St. Louis.

“The major universities, because they are major universities in college athletics, they are going to have more eyeballs on them — whether it’s Texas, Ohio State, or in basketball, Duke and Kentucky and North Carolina,” he said. “So they do have a built-in advantage, so to speak.”

Just a few weeks ago, two of those schools made a move to increase their advantage.

The University of Texas — the biggest moneymaker in college football, according to The Wall Street Journal — along with its bitter rival, Oklahoma University — ranked No. 7 — announced that they will be leaving their longtime conference, the Big 12, to join the Southeastern Conference. That conference just signed a $300 million TV deal with ESPN that will allow the SEC to pay its member schools almost twice what the Big 12 paid its members last year.

“I think if you are an institution like Oklahoma and Texas that have the kind of brand equity in college football that they have, they’re both in a position to be able to examine these options and essentially choose from the things they might want to do,” said Michael Butterworth, director of the Center for Sports Communication & Media at the University of Texas at Austin.

But it’s not just your Texases and Oklahomas that are trying to cash in. Just last year, more than 10 schools transferred their entire sports programs to new conferences. That included the 13,000-student Stephen F. Austin State University in Nacogdoches, Texas, which on July 1 moved from the Southland Conference to the Western Athletic Conference.

“We’re trying to predict the future,” said Ryan Ivey, the athletic director at Stephen F. Austin. “If we choose to make this move, is it going to achieve the goals that we set out to achieve?”

Ivey said his school’s goals include increasing awareness in some bigger cities and possibly getting more money.

“Obviously, the opportunity that we felt from a revenue standpoint was there, whether that’s the traditional TV contracts or whether that’s the additional ticket sales, you know, donations, those types of things that were going to excite our fan base,” he said.

Ivey said changing conferences cost Stephen F. Austin about $300,000. Texas and Oklahoma could pay more than $100 million combined to move to the SEC.

But Ellen Zavian, sports law professor at George Washington University, said these moves are long plays. Ultimately, she wouldn’t be surprised to see the largest conferences go out on their own.

“Walk away from the NCAA, create their own entity, get their own deals done in all aspects and really negotiate with other conferences, a championship,” she said.

But that sort of complete realignment would come with its own set of issues, according to Matt Mitten at the National Sports Law Institute at Marquette University.

“How do they reallocate rule- and decision-making power? How will the schools choose to do that, essentially, among themselves?” Mitten asked.

Because colleges don’t want to have to pay athletes out of their budgets even as TV contracts continue to climb into the stratosphere.