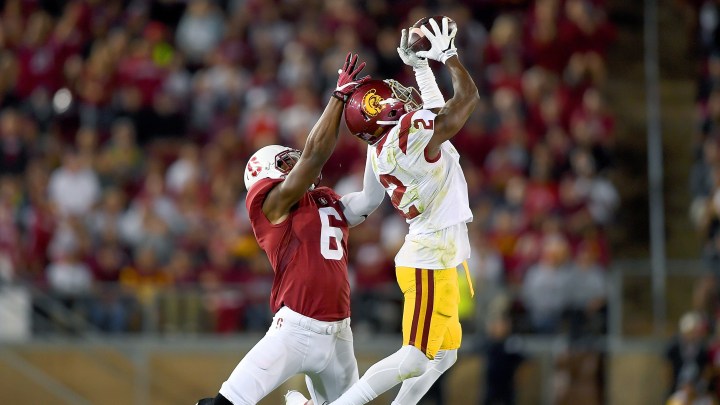 The glorious spectacle that is college football officially begins today, marking the beginning of the 150th season since college football got its start. To celebrate, let’s do the numbers on the sport that millions of people tune in to watch every weekend.

College football is believed to have officially begun in 1869, with the first ever American game featuring Rutgers and Princeton facing off in New Jersey. Though the game looked nothing like today’s football — with players kicking the ball and not being allowed to carry it — it was the start of football as we know it.

Today’s teams are also much larger than the 25-player teams of 1869. National Collegiate Athletic Association rules state that a football team can have no more than 110 players on its roster in the off-season, but most teams have more than that during the season.

There are 130 teams in NCAA Division I-A football, divided into 10 conferences, with six teams playing as independent. Teams are ranked in several polls, but the two most common are the Coaches Poll and the AP Top 25 poll.

The first AP poll was given to Minnesota in 1936, but regular rankings started in 1968. Alabama holds the record for most season-ending No. 1 rankings at 11, with Notre Dame following with eight.

The first ever American football college bowl game was the Pasadena Rose Bowl in 1902. Michigan and Stanford duked it out as 8,000 fans looked on. Bowl games didn’t really pick up until a few decades later; in 1937, there were six bowl games on New Year’s Day. The 2018-2019 bowl season saw 39 games.

Unsurprisingly, there’s a lot of money involved in college football. According to a 2016 Business Insider report, there are 24 schools that make more than $100 million from college sports. Texas A&M made the most at $192 million, with roughly a third of that revenue coming from football.

Coaches get a nice cut of that money. Nick Saban of the University of Alabama makes the most of any college football coach at $8.3 million in 2018. The next top 25 paid coaches each make at least $3.8 million.

While college football players don’t receive an outright salary, a lot receive scholarships. A 2013 Forbes article argues that since most college athletes receive training, meals, education and board they’re actually receiving a package “worth between $50,000 and $125,000 per year depending on their sport,” though it’s hard to quantify.

It’s hard to know how much money is actually awarded in football scholarships each year, as not all programs are fully-funded or take advantage of the 85-scholarship limit. But in 2013, colleges awarded more than $3 billion in athletic scholarships.

But those scholarships are hard-earned. An NCAA 2015 study on college athletes found that football players devote a median of 42 hours a week to their sport during the season — 75% of students reported they spend just as much time on their sport in the off-season — which is more than the approximately 38 hours a week they spend on academics.

The dangers of football have been widely documented, with multiple concussions and their long-term effects being a main concern. In the three seasons from 2013-2015, 500 concussions were reported. And according to a 2015 Center for Disease Control report on college sports related injuries, “Men’s football accounts for the most college sport injuries each year, as well as the largest proportions of injuries requiring [at least] seven days before return to full participation, or requiring surgery or emergency transport.”

And after all that hard work, the odds that an NCAA football athlete will go on to play in the NFL aren’t great: Only 1.6% move on to professional football. But 86% of NCAA athletes graduate, so there’s that.