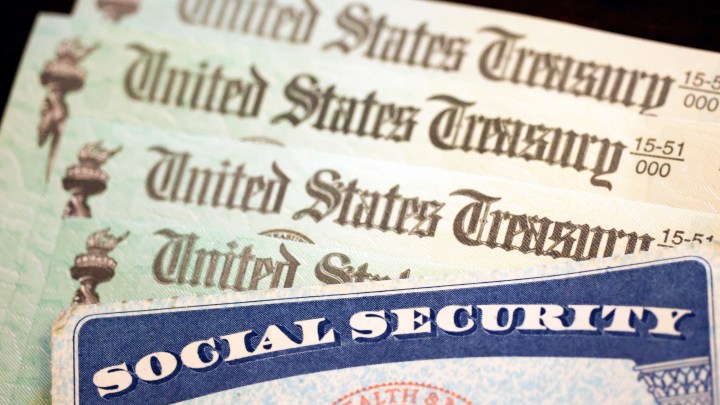 The Senior Citizens League, a nonpartisan group, estimates that Social Security beneficiaries will see a record-high cost of living adjustment in 2023. The group sees a 9.6% increase in payments based on the latest consumer price index, released last week. That’s an additional $159 per recipient on average.

But waiting for an annual increase while prices rise throughout the year is the hard part for people who have no other significant income.

I first met Michael Broward in line at a food bank in downtown Albuquerque, New Mexico. It was just before Thanksgiving last year, and inflation was starting to cut into his monthly Social Security check.

“I’m a little low on money because I’m on a fixed income, and right now, bills are like — it only leaves me about $100 extra a month,” Broward said. “So, it leaves me a little shy on the food situation.”

At the end of the line, he got a frozen turkey for his holiday meal and some staples, like dried beans and peanut butter.

A few months later, at the start of 2022, Broward got a nearly 6% boost to account for inflation. I checked in with him again this summer.

“When we got our last cost of living it was nice, like 140 bucks or something like that for me. But it’s all gone now because of the inflation,” he said. “The cost of everything has gone up to eat every cent of that cost of living adjustment.”

Broward said he’s lucky that his rent hasn’t increased. He’s eating less meat to save on groceries, but even his go-to substitutes are getting pricier.

“Eggs have gone up tremendously too, because they used to be about a dollar a dozen, maybe a dollar and a quarter. And they’re now like $2-something a dozen, I think.”

Between those higher costs and payments on a loan he just took out for dental work, “there’s no keeping up at this point.”

The Social Security Administration uses a formula based on the consumer price index to adjust retirees’ benefits — and it does that just once a year.

“In most years, that’s not a problem,” said Elaine Waxman, a senior fellow with the Urban Institute’s Income and Benefits Policy Center. “Because we’ve typically enjoyed pretty low inflation in this country. But this is a time period that’s really tested that.”

Prices have increased so quickly that Waxman said retirees are feeling the lag between prices that seem to rise every day and the annual benefits adjustment.

Food budgets are typically the first to be slashed, Waxman said. “People will often cut down on the variety, so they’ll eat kind of the same small array of things. They substitute toward calorie-dense and cheaper.”

That can translate into a less healthy diet or food insecurity. When inflation hits a certain rate, Waxman said, it should trigger more frequent reassessments.

Economist Alicia Munnell, who heads up the Center for Retirement Research at Boston College, agrees that the lag can present problems in times of rapid inflation.

“I think the thing to do, though, is to keep your eyes on the prize,” she said, adding that Social Security is already designed to prevent inflation from eroding retirees’ budgets.

“At some point, inflation will start going down, and retirees will get more than they need because it will be a retrospective look at high inflation,” Munnell said.

Over the course of a full inflationary cycle, she said, things usually balance out. “It’s too little early on, and it’ll be too much at the end.”

But for right now, many retirees have to tighten their budgets. Michael Broward in Albuquerque said he’s able to pay his rent, he’s getting enough to eat —  it’s the discretionary stuff he’s cutting back on.

“I don’t eat out, I don’t go to the movies. I don’t see myself flying anywhere,” he said.

Or even driving to many places other than church and the grocery store. “The price of gasoline has really even kept me from going up to the crest.”

The crest of the Sandia Mountains that overlook Albuquerque, that is.

“And I love to go up to the mountains, and I know it’s not that much money,” Broward said. “But gosh darn, everything — prices of oil to change your oil, tires— are gonna come up. I don’t want to spend $150 a tire and be shocked by it, or a battery.”

He’s being careful because, for now, there’s no room in his budget for unexpected bills.