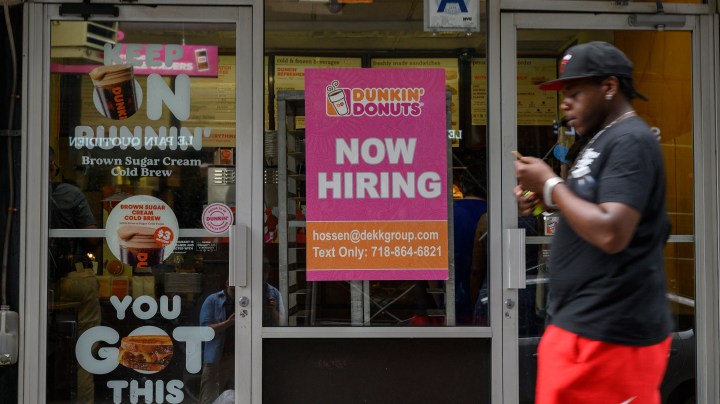 The Federal Reserve is meeting Tuesday and Wednesday to chart interest rate hikes meant to cool down the economy just enough to get high inflation under control, but not so much that the economy goes into recession.

A key figure in that equation is the job market, which has been really strong all through the recovery from the pandemic and has served as a bulwark against a sharp, broad-based economic reversal. But that rock-solid edifice is beginning to crack — just a bit — with signs the labor market is slowing down as Fed rate hikes bite and rate-sensitive sectors like tech and housing falter.

From April to June, the economy added nearly 400,000 new jobs a month. Though that number is strong, it’s not as strong as earlier in the recovery. Meanwhile, unemployment claims are up 50% since hitting an all-time low in March.

“There’s no doubt the labor market is slowing,” said Jason Furman, a senior fellow at the Peterson Institute for International Economics.

The Fed is trying to tamp down labor demand to keep wage inflation in check, Furman said, so it’s OK to have some slowdown in job creation.

Demand for workers is no longer as hot as it was six to nine months ago. Employers are posting fewer jobs and offering fewer signing bonuses, said Julia Pollak, chief economist at ZipRecruiter.

“It looks as though employers are not bending themselves into pretzels to attract workers anymore,” she said.

“Given the economic uncertainty, folks are saying that they’d rather hold onto their jobs as opposed to try to jump ship,” he said.

Bottom line: Things were great, they are getting somewhat worse, though they definitely aren’t bad. Not yet, anyway. The problem, said Joseph Brusuelas, chief economist at consulting firm RSM, is that this could all change very quickly.

“When the economy goes into recession, it doesn’t tend to turn like a big, slow battleship,” he said. “It tends to fall off a cliff.”

And by the time the economy’s losing jobs, there’s a good chance a recession has already begun.