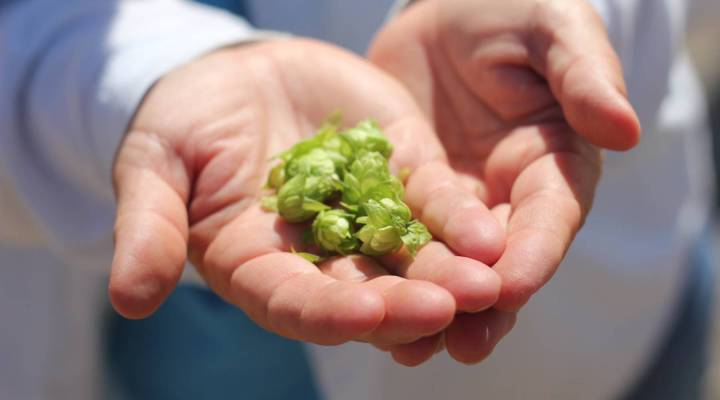 When we checked in last year with Patrick Smith, a hops and apple farmer in Yakima, Washington, getting his workers vaccinated was his main concern.

Since then, inflation has soared to a 41-year high and employers are continuing to raise wages to attract workers. Smith said his wages at Loftus Ranches are up 7% this year, but that is on the lower end of his cost increases. Some fertilizer materials have more than doubled, he told “Marketplace” host Kai Ryssdal, and the strong dollar is squeezing revenue on hops he exports to Europe.

Patrick Smith: Yeah. Yeah. Good to talk to you too.

Ryssdal: OK, been like a year and a half. First of all, the standard warm up question: How’s business?

Smith: You know, we’re hanging in there. And, you know, we’ve got our challenges related to some of the macroeconomic stuff going on that I’m sure we’ll talk about. But overall, beer is still good business. People are still eating fruit and vegetables. And yeah, so overall, I don’t have that much to complain about actually.

Ryssdal: All right, well, good. First of all, that’s good news. Now let’s break down the macroeconomics and the stuff you grow. Hops, first of all, obviously, you guys run a brewery as well. Do I remember you telling me at some point that you sell a bunch of your hops over in Europe, right?

Smith: Yeah, that’s correct. About a third of our total production is sold over in Europe.

Ryssdal: OK, so let’s do a little foreign currency exchange here. And as you well know, the dollar and the euro are darn near at parity. I don’t know where they are exactly today, but it’s pretty close to one to one. that cannot be good for your business on contracts that I imagined were signed when the euro was not at parity.

Smith: Yeah, I think our weighted average contract price over in Europe is somewhere in the, you know, $1.13, $1.15 range [per pound]. We do have some expenses over there in Europe, personnel and, you know, logistics and stuff like that, that we can pay with the revenue that we receive in euros, but when we bring whatever’s left back over to the U.S. here, of course, we’re getting 10% to 15% fewer dollars than we used to.

Ryssdal: That doesn’t seem like a viable business proposition.

Smith: It’s tough. But part of the risk of doing international business is currency risk, of course. And so we do some hedging and stuff like that to help minimize our exposure. But certainly for exporters like us, you know, this significant dollar strength does impact our ability to be competitive in those markets.

Ryssdal: OK, so the monster under the bed, inflation, what does that mean for you, a guy running a family business, a farmer ranch In the Yakima Valley in Washington?

Smith: Yeah, I mean, it’s affecting us, actually. You know, our wages are up 7 plus percent this year over last year, and, you know, other major cost categories for us. In some cases, some fertilizer materials are up nearly double from where they had been even just a year or two ago, and, you know, when I look at our top four or five cost categories and wages being up 7% is on the lower end of increases, you know, that’s definitely squeezing margins substantially for us.

Ryssdal: What is your ability then to pass on cost to consumers?

Ryssdal: So that means you have to take the price that you can get, basically?

Smith: Yeah. A lot of our products are easily substituted with products coming from other parts of the world or other parts of the United States. And so a lot of our multiyear contracts that were signed when inflation was, you know, 2% and we built our kind of five-year plan on 2% inflation, and now with inflationary pressures where they are, that’s certainly looking a little less attractive than maybe it did two or three years ago.

Ryssdal: Overall then, Loftus ranches, are you guys doing well? Are you hanging in? Are you grinding it out? What are you doing?