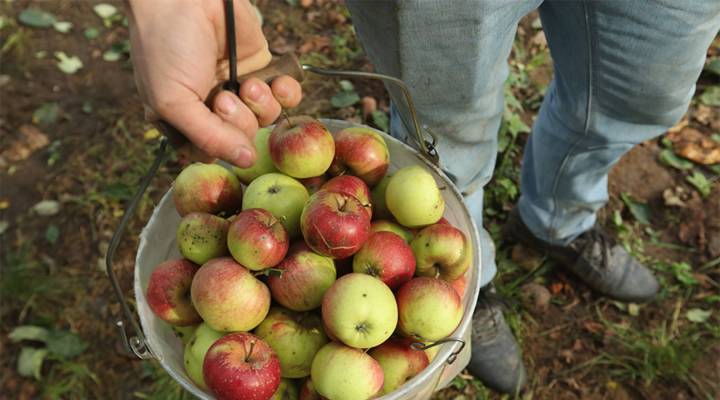 Loftus Ranches is a 2,500 acre family owned farm in Yakima, Washington. Patrick Smith, his father, and his father’s cousin own it together. They grow apples and hops. Apples make up about 20-25 percent of their revenue and hops are the rest. Smith spoke to Kai Ryssdal about what is happening to his family’s agribusiness in light of the U.S.-China trade war. The following is an edited transcript of their conversation.

Kai Ryssdal: So how are things? I mean here you are once again sort of the guy in the middle of a couple of trade things: the China thing, the NAFTA thing, the renegotiation thing, I mean it’s a mess for you.

Patrick Smith: Yeah, yeah. It’s been a long you know slog over the last few months here and until the new NAFTA talks and the China talks you know have some sort of resolution and the tariffs get lifted, we continue to have pretty strong headwinds in moving our products into those markets and it doesn’t seem like there’s a resolution coming in anytime soon.

Ryssdal: Without getting into actual dollars and cents because that’s none of my business, but how much has the last, how long we’ve been doing this, like eight nine months now? Like on a percentage basis how much does it cost you?

Smith: So, our apple exports had grown 34 percent over the prior two years and subsequently now are down 29 percent this year — the four largest markets for Washington apple exports are Mexico, Canada, India and China and Taiwan and those markets collectively are down 30 percent. They represent about 70 per cent of our total exports. Tensions between the countries on trade has had a very noticeable impact on our ability to move product in there and some of it also of course is the strength of the dollar which is a consequence of these trade wars.

Ryssdal: You and Tim Cook,  he was complaining about the strong dollar the other day.

Smith: Yeah it’s the same story, yeah for Apple and apples, ya know.

Ryssdal: Look at that we made it we made a global trade joke.

Ryssdal: So if this goes on now for whoever knows how much longer it’s going to go on what are you going to do Patrick?

Smith: That’s a good question. The hard part is, is that you know our industry right now is in as precarious a place as it’s been in many years. Prices just generally are poor. You know we’re obviously having trouble with exports. Costs continue to go up driven in large part by labor. I think every apple grower in the state of Washington is thinking these same things. But we’re not really getting much help. We’re not part of the of the market facilitation program that USDA has put out. We’re just kind of on our own in a way it seems like.

Ryssdal: Just For the beer aficionados among us, people remember that you grow hops up there as well. How’s that side of the business doing?

Smith: That side of the business is a bit better than apples at this point. The craft beer industry here in the U.S. continues to drive some growth there. Keep drinking IPA, I know how much you like IPA. But about 50 to 60 percent of our production in the hop industry is exported and so while we haven’t been hit with tariffs we are feeling the impact of the strong dollar and the you know just general trade tensions between the U.S. and other countries and I think that that’s having an impact there as well.