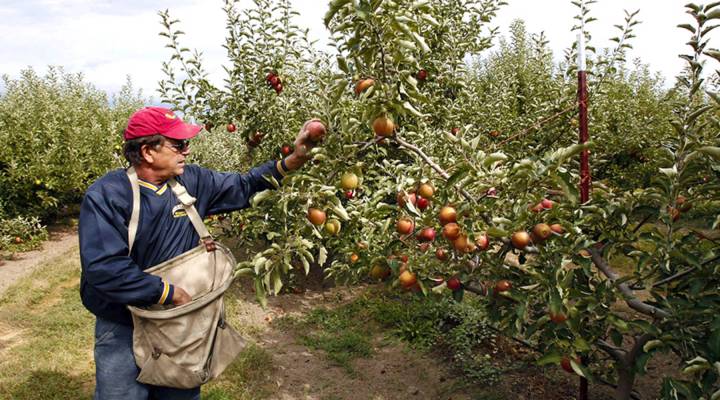 Fresh and dried apples are two of the products on the list of proposed tariffs that China’s Ministry of Commerce announced this week. The proposed 15 percent tariff is very big deal up in Washington. It’s the No. 1 apple-producing state in the country and the source of $50 million worth of apples exported to China last year. Marketplace host Kai Ryssdal spent some time with a guy who grows apples in Yakima, Washington, as part of Marketplace’s 2016 election coverage “How the Deck Is Stacked.” He checked in with him today. The following is an edited transcript of their conversation.

Kai Ryssdal: So what is your apple-farmer gut telling you about all of this tariff news?

Patrick Smith: I think farmers feel like we’re kind of caught in the crosshairs in a fight that we didn’t start and that we don’t want. Unlike most industries, U.S. agriculture is a net exporter to the world. And so, in any trade war, U.S. farmers are disproportionately impacted by retaliatory measures from our trading partners.

Ryssdal: Give me a sense of scale for you. Loftus Ranches grows, you guys grow, produce, whatever the word is, how many pounds, bushels of apples every year?

Smith: Yeah, it’s a lot of apples, yes. More than I can eat.

Smith: That’s the thing is that the tariffs don’t reduce the production of our orchards, and so we’re going to have to find another market for that fruit. So, you know, that disproportionately then hurts the farmer. That’s going to come back to the growers in the form of lower prices for our fruit.

Ryssdal: Right. Let me ask you a couple of big-picture trade questions — bigger-picture trade questions, I guess, and then I’ll let you go. Trans-Pacific Partnership and NAFTA. Both of those are export-oriented trade deals that the Trump administration has either pulled out of or has put left hanging in the balance. How are you feeling about all that?

Smith: Very nervous about all that as well. NAFTA has been a huge benefit to American farmers. Prior to NAFTA, Mexico had a 20 percent tariff on U.S. apples, post-NAFTA now, however, many years later, Mexico’s our No. 1 export market for U.S.-grown apples and Canada is No. 2. So whatever happens with the NAFTA renegotiations, if it hurts the competitiveness of our products in those markets, you know, that’s just going to kind of compound what’s happening with China. It not only hurts us as farmers, it hurts the consumers in those countries.

Ryssdal: Patrick Smith with his family runs Loftus Ranches up in Yakima, Washington. They grow apples. And also, the day I was there, we went hops picking. Actually, the crop had just come in, right, Patrick, that was the deal?

Smith: Yeah, that’s right. And hops are another big export industry for this area, and so we haven’t been caught up in that yet on the hops side and hopefully it stays that way.