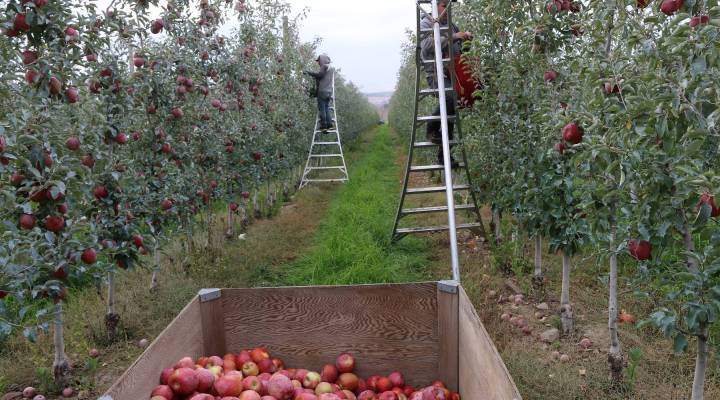 This weekend, Canada agreed to join the United States and Mexico in a new trade deal. The White House says the agreement is a “win for American farmers, ranchers and agribusiness.” Washington state is a big producer of both apples and hops, and Mexico and Canada are big buyers. Marketplace’s Lizzie O’Leary talked with Patrick Smith, who runs Loftus Ranches in Yakima, Washington, about what this means for his apple- and hops-growing business. The following is an edited transcript of their conversation.

Lizzie O’Leary: So based on what you know so far, how does this deal look so far?

Patrick Smith: I think there’s a lot for farmers to be excited about in this deal. Farmers, of course, deal with a lot of uncertainty already, and so taking away some of the uncertainty regarding a couple of our most important trading partners is welcome news for most of us.

O’Leary: Do you think the people around you are exhaling a little bit today?

Smith: I do. I do. You know, Mexico is a very important market for U.S. agriculture in general and in our region especially, fresh apples. And with the back and forth on trade over the last few months, Mexico had established a tariff on U.S. apples. And so now apples in this deal have no tariff applied to them, and I think for us here in the central part of Washington state, that’s a big relief.

O’Leary: So last time you were on the show you talked about apple exports slowing down. Do you think that maybe this deal speeds up apple exports this year, or has that ship already sailed?

Smith: I think we’re hoping that export levels will return to where they were earlier this year. You know, we were having a really good movement into Mexico in the first four or five months of the year, and then this summer after the tariffs were imposed, that movement slowed down significantly. And so hopefully, we do see a return to those levels from the first half of the year and we’re hopeful that that will get there in short order.

Patrick, left, and Mike Smith, owners of Loftus Ranches in Yakima, Washington, in 2016. Loftus Ranches grows apples and hops. Patrick says Canada and Mexico are two of his industry’s most important trading partners.

O’Leary: When you look at this, are you sitting there thinking this is just NAFTA again? Or are there differences that you see. I mean, how does this play out for you on the ground? Is that the same thing with a different name?

Smith: It does kind of look like that from our end right now. I’m sure that there are some differences for maybe some other industries, but for us and our businesses, both hops and apples, this looks a lot like what we’ve had last few years, and that’s good.

O’Leary: Are you still concerned about trade in the rest of the world, trade with Asia, for example? Or has this given you enough breathing room that you get to sleep easy tonight?

Smith: I think we’re still hopeful that this is one step toward maybe normalizing trading relationships with Asia, with Europe. Mexico and Canada, of course, are two very, very important markets for us, but we’re moving apples and hops from around the world and would like to see, you know, more of these types of deals come, similar to the Trans-Pacific Partnership that we’ve pulled out of. But more of these types of deals would be very welcomed by most of us in our industries.

O’Leary: I’ve got to ask you, the first time you were on this show in 2016 , you were worried about having enough workers to do the work you do and harvest your crops. Is that still an issue for you?

Smith: Yeah, it absolutely is. Labor in our part of the country up here, farm labor is still somewhat scarce for us and many other employers in this region. We’re extensively using the H-2A guest worker visa program to help meet our labor needs. And there are some bills that are, you know, somewhere in Congress right now that would make some positive changes to the program. But a lot of those efforts have kind of stalled out over the last few months, and so we’re hopeful that we will see changes to the program as soon as Congress is ready to act on it.