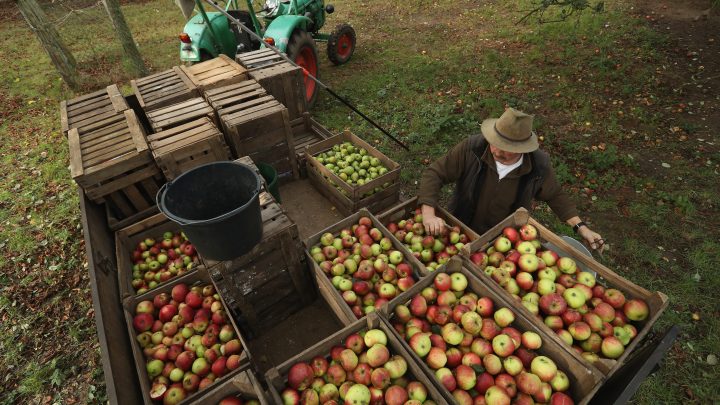 While much of the economy is shut down because of the coronavirus, America’s farms continue needing their usual attention. Marketplace host Kai Ryssdal spoke to Patrick Smith, who runs the apple and hops farm Loftus Ranches in Yakima, Washington.

“We’re considered an essential business by the state of Washington,” Smith said. “So we’re doing everything we can to continue the critical activities that we need to do, with a lot of added precautions for the sake of our employees.” Smith has recommended that they wear masks and has implemented staggered start and end times for his workers.

“The hardest part right now is projecting what your demand looks like for the rest of this year,” Smith said. He saw a 52% spike in apple shipments the week of March 16. “That was the week when everybody started going out buying toilet paper and all the things that they needed.” Since then, Smith said apple sales have settled down.

In addition to apples, Loftus Ranches farms hops, and the Smith family runs a brewery. “Packaged beer sales in grocery stores and outlets like that are up, but probably not enough to cover up for the lost volumes at bars, restaurants, stadiums and airports.” At Smith’s own brewery, Bale Breaker Brewing Co., packaged sales have increased, but the bar has been closed for about a month.