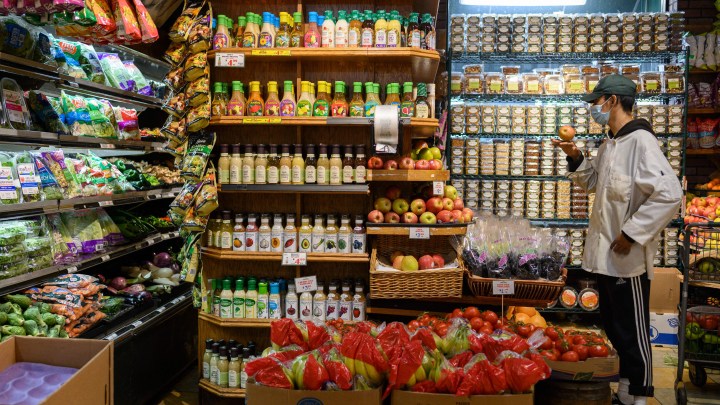 COPY
Food prices were up 10% year over year, according to the Bureau of Labor Statistics. Angela Weiss/AFP via Getty Images

Food prices were up 10% year over year, according to the Bureau of Labor Statistics. Angela Weiss/AFP via Getty Images
Listen Now

No doubt you’ve heard the figure by now: 9.1%. That is how much prices have gone up between June of last year and June of this year, and it’s the biggest number since 1981. The Bureau of Labor Statistics called it “broad-based,” which is a euphemism for inflation being … pretty much everywhere.

That said, there were some particulars driving the surge. Some might be temporary; some not so much.

In just one month, from May to June, prices rose 1.3%. The month-to-month numbers haven’t moved that much in 17 years.

“Energy was about half of that,” said Justin Weidner, a U.S. economist at Deutsche Bank. Inflation’s No. 1 driver in June was the cost of gasoline, up 60% year over year.

On the bright side, “gas prices are already down 40 cents from their peak, so with oil falling, gas prices should continue to decline,” Weidner said.

So, six months from now, we probably — knock on wood — won’t be talking about gas prices driving inflation. But inflation is running on a lot more than gas. Food, up 10% year over year, was another big driver.

The war in Ukraine is still disrupting global food supplies and doesn’t look like it’s going to resolve anytime soon. Then, rounding out the top three drivers of inflation last month, there’s the rent.

“Which is a highly persistent and very sticky inflation measure,” said Simon Harvey with Monex Europe.

The rent index rose 0.8% in June, the biggest monthly jump since 1986. And the nasty thing about the rent is that it rarely ever goes down. But in, say, six months, it should at least not be rising as much, according to Harvey.

“Shelter most probably will be still adding somewhat — nowhere near as much as inflation pressure — but somewhat.”

Now, looming behind all of this is, of course, the Federal Reserve, trying to fight inflation by raising interest rates. These inflation numbers make it clear that fight has far to go.

“This is showing inflation is still extremely strong, very little sign that anything the Fed has done up to this point is slowing inflation yet,” said UBS’ Detmeister.

The Fed’s efforts, he added, may not show strong results until the beginning of next year.