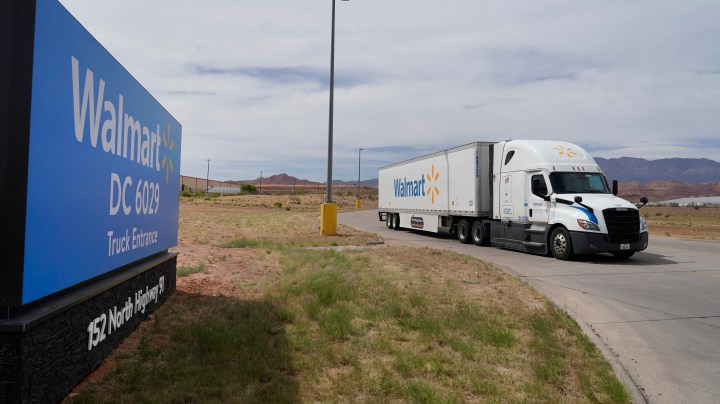 Walmart to charge transportation fees to some suppliers

COPY
The fees Walmart charges will eventually be passed on to consumers. George Frey/Getty Images

Walmart to charge transportation fees to some suppliers

The fees Walmart charges will eventually be passed on to consumers. George Frey/Getty Images
Listen Now

There are a couple of different ways that suppliers get their goods to Walmart. They either drop the stuff off themselves or Walmart collects it from them. Beginning Aug. 1, Walmart is going to start charging suppliers where it does the collecting.

In a statement, the retail giant said the decision was made in an effort to keep prices low and “adapt to the dynamics of the current economic environment.”

That current economic environment has been expensive, transportation especially.

“For example, there’s been a shortage of truck drivers,” said Jennifer Bartashus, a senior equity analyst with Bloomberg Intelligence. “But the number of goods that still need to be moved from point A to point B has only gone up … and that surge in demand results in higher costs.”

Some other big retailers have also started charging fees. While suppliers probably don’t like the new charges, most are likely to accept them.

“Honestly, when we think of some of the biggest retailers, these orders could be everything to the supplier,” said Sonia Lipinsky, a managing director with the retail practice at AlixPartners, a global management consulting firm.

Suppliers may also try to pass those costs along.

“They’re going to try to see how they can minimize this pain, so to say, and maintain their own margins at the same time,” said Natalie Kotlyar, who leads the retail group at the accounting and advisory firm BDO.

While these fees may mean retailers can hold off on raising prices in the short term, eventually that pain will come back around.

“Ultimately we, as consumers, will have to pay for it. The supplier, at some point, will build into the cost of goods sold and pass that cost back to consumers,” said Nick Vyas, who runs the Randall R. Kendrick Global Supply Chain Institute at the University of Southern California.

It’s almost like a game of whack-a-mole where there is no winner. Push costs down in one place, they’ll pop right up in another.