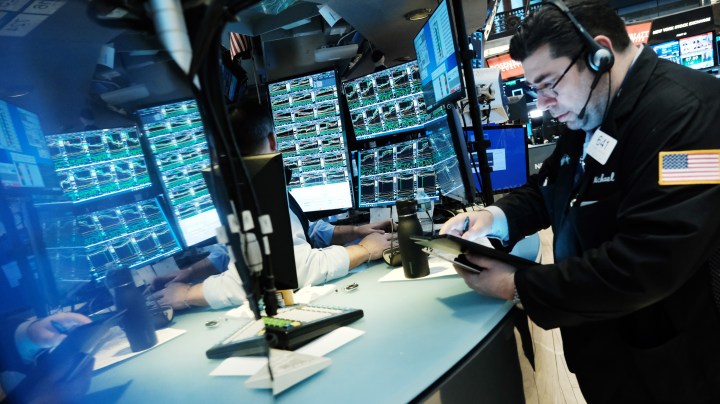 COPY
The uncertainties of the pandemic and the Russia-Ukraine war make it especially difficult to predict future economic conditions. Above, inside the New York Stock Exchange. Spencer Platt/Getty Images

The uncertainties of the pandemic and the Russia-Ukraine war make it especially difficult to predict future economic conditions. Above, inside the New York Stock Exchange. Spencer Platt/Getty Images
Listen Now

Every three months, the International Monetary Fund issues global economic growth forecasts. Its latest report, which came out Tuesday, projects that global growth will be almost cut in half this year, falling from an estimated 6.1% in 2021 to 3.6% in 2022.

But this is a very tough time to be in the economic prediction business.

Picture an elephant. It’s standing in the dark, surrounded by people who are touching it, trying to figure out what it is.

“And they know that they aren’t getting the full picture. So they know they’re uncertain,” said Claudia Sahm, a former Federal Reserve economist who’s now with the Jain Family Institute. This is what economic forecasting is like right now, she said.

“Then we’re at the point where that elephant has started running. So not only are we not getting the full picture, we can’t even totally keep up with this thing.”

Tuesday’s IMF report is littered with caveats. It says its forecast assumes that the war in Ukraine stays inside that country’s borders, Russia’s energy sector is spared from further sanctions and the pandemic doesn’t get any worse.

IMF economist Malhar Nabar is one of the report’s authors. Uncertainty has been plaguing his forecasts since the start of the pandemic. Now there’s the war.

“The war — and widespread sanctions on Russia — that is something that we don’t really have historical precedent for in recent memory,” he said.

It could also skew the report’s predictions for global inflation this year, which the IMF pegs at 5.7% in advanced economies and 8.7% in emerging ones. Ukraine is a big producer of commodities like wheat, which it can’t grow or export during the war. So commodity price hikes could nudge up inflation.

Gregory Daco, chief economist at Ernst & Young, also makes economic forecasts. He said you have to be humble.

“There are very likely going to be developments that depart from your baseline assumptions.”

And then be nimble enough to fold those unexpected developments into your forecasts.