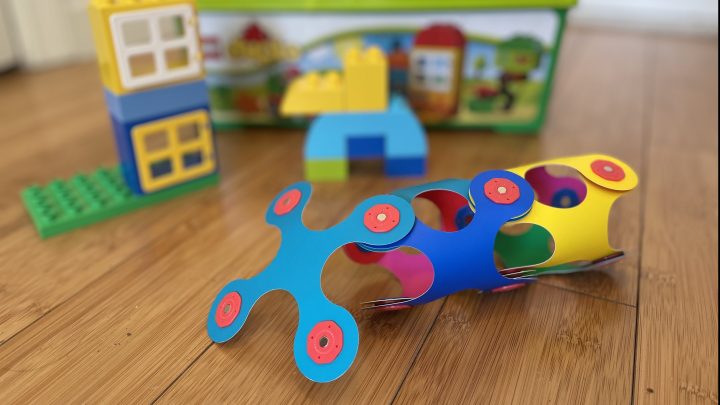 COPY
Clixo, a toy that launched during the pandemic, uses magnets to connect pieces. A Duplo Lego set is in the background. Stephanie Hughes/Marketplace

Clixo, a toy that launched during the pandemic, uses magnets to connect pieces. A Duplo Lego set is in the background. Stephanie Hughes/Marketplace
Listen Now

Most people wouldn’t accuse Lego of being too adult. But toy designer Assaf Eshet does.

So Eshet created a different building toy. It’s called Clixo and launched during the pandemic. It’s a time when people have been buying a lot of toys: more than $28 billion worth last year, according to NPD Group. That’s up 13% from 2020.

But traditional venues for launching a product, such as toy fairs, have been canceled. The media and retail landscapes have changed, and up-and-coming toymakers have to compete with ones that have been around for decades.

In other words, the road to the toy box is littered with tiny Lego pieces that will jab your business plan right in the foot.

“It’s really hard to catch on because when you’ve got a kid who is a Lego fan, you have to convince them to put down the Lego to pick up something new,” said Chris Byrne, an independent toy analyst and consultant.

Eshet is no stranger to big companies. He’s developed toys for companies including Fisher-Price, Tomy in the United Kingdom and Ravensburger in Germany. But with Clixo, he wanted to create a totally new tool that would allow kids to construct and deconstruct.

Clixo’s pieces are flat and flexible, made of brightly colored recycled plastic. The core shape looks similar to a flat fidget spinner, with magnets in each of its rounded ends. You can bend the pieces and connect them to each other, which produces the eponymous click. Eshet used recycled bottles to develop his own proprietary material for the toy.

“It has the right bounciness and feedback when you play with it,” he said. “You fold, but it doesn’t crease and it goes back into shape.”

Originally from Tel Aviv, Israel, Eshet is now based in Brooklyn, where he lives above the retail and design space for Clixo. The store opened during the pandemic, when the toy launched; it’s the only retail space totally devoted to Clixo. The idea is in order for people to buy a new toy, they have to try it out.

The space looks more like an art gallery than a store. Clixo creations hang from the ceiling, and there’s a magnetic wall that kids can stick their projects to. Merchandise starts at $17.99 a pack and is stored in a real yellow Volkswagen Beetle — which greets the customers who open its hood with a “Hi!”

Marketplace enlisted two testers to come to the store, brothers who are right in Clixo’s target age range: Jagger Clemens, 8, and Thelonious Clemens, 5. They are Lego users and seemed to get the hang of Clixo.

“I’m gonna try and make a suit of armor,” said Jagger, attaching pieces together to make a sleeve. “Then put my arm right there. Oh, ayayayayayay!”

The sleeve doesn’t connect the way he intended. So he moved on to make an elephant.

In addition to the store, Clixo is also relying on kids getting hooked on the toy in the classroom. The company paid Andy Yung, who teaches pre-K at a public school in Flushing, Queens, to create activities using Clixo. Yung got into it and started including the toy in his own lessons.

“One of the monuments that Flushing is known for is the big Unisphere that you may have seen in the ‘Men in Black’ movies,” Yung said. “I asked them to recreate that using Clixo, and there were some wonderful ideas.”

Whether this kind of engagement will lead to increased sales isn’t clear. Clixo won’t give any figures — and a good idea is no guarantee of success.

“I see great concepts all the time, and it’s not going to go anywhere unless you can break through,” said toy analyst Byrne.

Byrne said as people start to shop in person again, new toys will need to be in stores in order to compete, although they might not want to start with the biggest retailers.

“If you’re at Target, you have a window in which to hit a certain level of sales,” Byrne said. “If you don’t hit that, you’re going to be delisted, right? You’re not going to get a second bite at the apple. “

Byrne points to building sets that didn’t make it big, like Capsela, which used plastic spheres and motors. Old commercials describe it as “the construction set of tomorrow.”

Capsela appealed more to people who wanted a hobby, Byrne said, as opposed to kids who just wanted to play. And for a toy to be really successful — or even iconic — it needs to appeal to everyone.

So, while Eshet, Clixo’s creator, may think Lego bricks are too adult, he is thinking of that audience, too. That’s why the next sets will be released in black and a tasteful shade of sand.