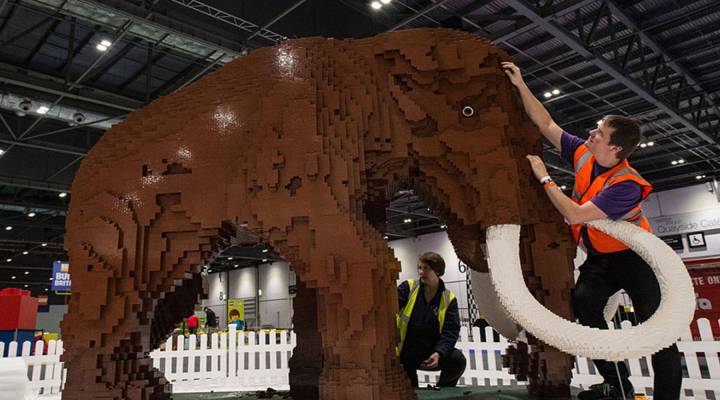 COPY
Husband and wife Annie and Ed Diment put the final bricks in place on their 400,000-piece "Ice Age" display at a Lego exhibition in London in 2015. The woolly mammoth took nine weeks to build. Chris Ratcliffe/Getty Images
How to be a...

Husband and wife Annie and Ed Diment put the final bricks in place on their 400,000-piece "Ice Age" display at a Lego exhibition in London in 2015. The woolly mammoth took nine weeks to build. Chris Ratcliffe/Getty Images
Listen Now

Everyone has a dream job growing up: doctor, vet, ice cream taste tester. But how do you actually get the gig? Marketplace Weekend is looking into how, with the occasional series, How to Be a …

My name’s Matthew Ashton and I’m vice president of design of the Lego Group. The teams I work with: the teams that develop all of the physical toys. My job on a day-to-day basis is working with the design managers of those teams to bring all of those ideas to life in plastic form. And then I also have the opportunity to work on the “Lego” movies as well, which has been a kind of dream come true for me. Very exciting, very interesting job that is different every single day.

I think if I really think back to my own childhood, toys were such a really big part of my life. And I loved toys so much, and I actually remember sitting on my bedroom floor playing with my Lego with my brother, just dreaming of being a toy designer when I grew up. But as I grew up, I kind of forgot that and thought, “That’s not a real thing, that’s what Tom Hanks does in ‘Big,’ the movie” or something that Santa’s little helpers do, and it’s not a real job, so I just knew that I wanted to do something creative. I decided I was going to be a fashion designer, went to university.

I ultimately landed my dream job completely by accident. Some people from Lego spotted me and really liked what I did. So transitioning from fashion design to toys was kind of a dream come true anyway. I had done fashion and enjoyed it, but this was my ultimate childhood dream.

We recruit designers from all different places in the world and from all different backgrounds as well. We’ve probably got around 250 designers working in the department at the moment, and we’ve got 32 different nationalities within our department right now. A lot of the people that we recruit in come from a toy design background or an industrial design background. But we’ve also occasionally hired just adult fans of Lego — the absolute passion they’ve built since they were a child and the amazing builders. We’ve taken the opportunity to actually invite some hobbyists in and be part of our team as well.

Everybody has to send in an application with their portfolio so that some visual representation of what they do. So that can either, if they’re coming from a fan background, be the models that they’ve built. If they’ve come from an industrial design background or whatever, then they need to sort of submit all of their projects. But the one thing that I personally look for is that balance between sort of professionalism that you can get a job done, you can follow a process from A to Zed to get something launched, and you also still need to have a bit of that inner child within you that you don’t take things too seriously or simply the fact that they really want to do something that’s going to make kids dreams come true and give them toys that they’re really engaged with playing with.

It’s a toy that you have to think about. So it’s kind of like a jigsaw puzzle that they sometimes struggle through a little bit, but the sense of pride that a kid has when they’ve completed something, they’ve made something three dimensional, and it’s something that they can ultimately play with and the joy that that brings to them is why I do this and my job so amazing.