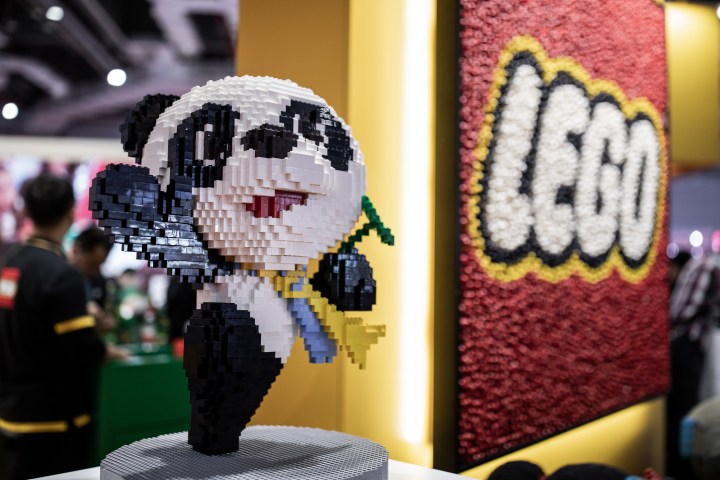 COPY
Mascot Jinbao made of Lego bricks is on display on day three of the China International Import Expo at the National Exhibition and Convention Center in Shanghai, China. Photo by VCG/VCG via Getty Images

Mascot Jinbao made of Lego bricks is on display on day three of the China International Import Expo at the National Exhibition and Convention Center in Shanghai, China. Photo by VCG/VCG via Getty Images
Listen Now

Counterfeit goods are big business in China. But authorities are fighting back. Last month, police uncovered a gang accused of manufacturing and selling $30 million worth of fake Lego.

How does a toy giant like Lego take on counterfeiters? According to Robin Smith, vice president and general counsel for Lego China, fans of the Danish brick maker play a big role. She spoke to the BBC’s Vishala Sri-Pathma.

Robin Smith: We find them through all the regular channels. I would say our sales force sees them in the marketplace, and we get word from outside counsel who may be out shopping. We get word from customs seizures about different copycat companies. Then, also, there are raids that are done by government authorities. They may be looking for something else, but sometimes they find a lot of other copycat products. We have private investigators that are also out in the marketplace at certain times, trying to give us a good picture of the landscape.

Vishala Sri-Pathma: With the private investigators, what do they get up to? What do they do?

Robin Smith: They will go out and look in different marketplaces. So there might be an area that’s known for having copycats or counterfeit products. So they will go and check that out to see what’s there, and bring that information back to us. Then we figure out how we either can act on it or whether the authorities would be interested in the information. But I think there’s one way we’re probably very unique as a company and that is that we have this global network of fans of ours, of our product. We call them “Adult Fans of Lego” or AFOLs. And they actually will send us sets in the mail with the receipts so that we know where they found it and how much it cost. And I’ve had some fans that have been doing that for all 20 years that I’ve been with the company, which is fantastic.

Robin Smith: Yeah, yeah. They are great brand ambassadors and that’s a huge help for us, because we just can’t be everywhere.

Vishala Sri-Pathma: How much of a threat is that kind of sub-industry to the big brands?

Robin Smith: It is a threat to our business, but I think it’s more of a threat … and where we’re more concerned … is in the safety of the products that people are getting when they buy a copycat product, because safety is of utmost importance to us. With copycat products, you get no guarantee on the safety of what you’re going to get in the package. I’ve actually seen a lot of things in with copycat bricks, in sets that are trying to look like Lego sets. You see tree branches or insects or candy wrappers. You name it. I think in 20 years I’ve seen lots of different things go in there. And the quality of the facilities in which they are packing these products or in which they are molding these cheap plastic bricks is also not good, and we had that confirmed, definitely, with the photos we got from the police in this recent raid that the Shanghai police did.