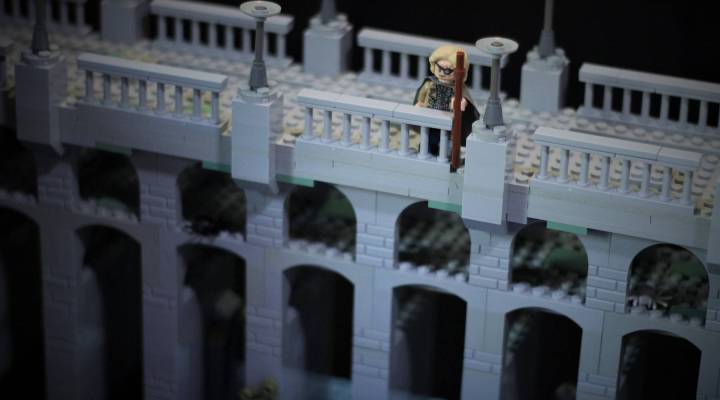 COPY
At age 15, Kaleb Johnson sold some of his Harry Potter-branded Legos, which included a similar Mad-Eye Moody figurine. That sale netted him $2,000. dbowker3d/Flickr

At age 15, Kaleb Johnson sold some of his Harry Potter-branded Legos, which included a similar Mad-Eye Moody figurine. That sale netted him $2,000. dbowker3d/Flickr
Listen Now

Last week, Danish toymaker the Lego Group, the number one global toy maker by sales, reported its earnings for the year. The company said profits were up from a year prior.

But behind Lego’s retail outlets and global distribution networks is a robust secondary market, driven by passionate Lego fans willing to pay top dollar for the perfect, rare, or missing Lego bricks.

AJ Holtz is one of those fans. Back in 2009, Holtz was hoping to raise some cash while in college, so he looked up the value of some of his old sets on eBay. “I was just blown away by the value that some of these pieces were worth,” Holtz said.

One of his miniature figures — an Amazon rainforest king — was going for almost $20. Eventually, Holtz started buying up pounds of Legos on eBay, then reselling the valuable pieces for a profit. He says the trick is knowing what to look for. He once noticed a tiny plastic feather, meant for a mini-figure’s cap, that buyers were selling for $13.

“I zoom in on the pictures a lot on eBay,” Holtz said. “I’ve been doing it just long enough now where I can kind of recognize pieces that might be worth something.”

Holtz runs a Lego store on the independent site Brick Link, which lets Lego sellers list their entire inventory of pieces and sets. In fact, thousands of Lego transactions happen every day on sites like Brick and Brick Owl. Brickpicker, another independent Lego site, offers historical price data and tools to help Lego enthusiasts price out their collections.

Nate Tobik, the CEO of a banking analytics company called Complete Bank Data, has been buying and selling entire Lego sets for about eight months. He says part of what drives demand is the sheer enthusiasm (as well as the financial means) of Lego fans.

“A lot of the buyers are people who are in their 30s, 40s, and they’re looking for something that’s nostalgic from when they were a kid,” Tobik says. Tobik, an investor himself, brings financial savvy to his Lego investments. “I’m a sucker for finding things that are cheap when they’re mispriced,” he said.

But it’s not just investment acumen that can make the Lego trade worthwhile. Kaleb Johnson, a Lego seller based in Canada, says successful sellers have to have a passion for Legos. “I am obsessed with Lego,” Johnson said. “I can spend hours sitting there, sorting the pieces back and forth.”

Johnson got into selling Legos about eight years ago. He was 15 and his family was living paycheck-to-paycheck. To help out, he decided to sell some of his Harry Potter-branded Lego mini-figures. Those included a Hungarian Horntail dragon and a Mad-Eye Moody mini-figure. The sale netted Johnson roughly $2,000.

Johnson bags up Legos and sells them locally for $10 each, by the pound.

“It sparked my interest in selling,” Johnson said. “My mom realized all these little … she calls them stupid plastic toys … actually had some money to it. We’re kind of like a team now.”

Johnson says he does the online posting and the sorting, while his mom cleans the pieces, and meets with some of their local buyers. He says they eventually made enough money in the Lego trade to take the family on a two-week trip to Walt Disney World.