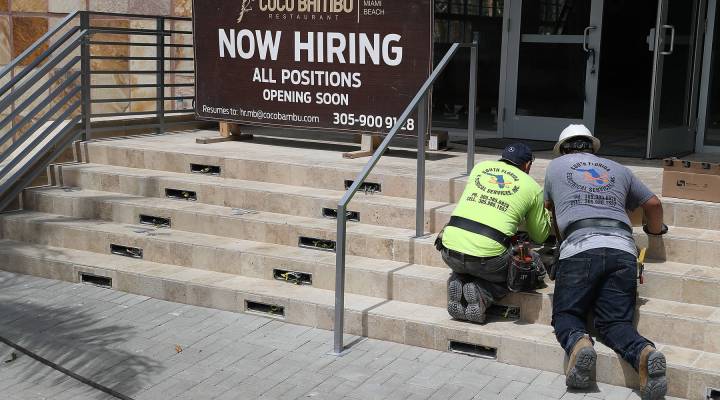 COPY
The number of jobs created has risen steeply over the past few months, but employers may not find workers as easy to attract as in the past. Joe Raedle / Getty Images

The number of jobs created has risen steeply over the past few months, but employers may not find workers as easy to attract as in the past. Joe Raedle / Getty Images
Listen Now

It would be nice if job creation just kept increasing by a quarter-million a month. But, it’s not going to be like that. Job gains might pick up a little, especially in the fall, but there’s now 9½ million people looking for work.

What will the economy have to overcome to make up those final miles — probably the toughest miles — on the road to full recovery?

First, while we are adding a lot of jobs month after month now, a lot of people who were knocked out of the labor force are still not working or even looking.

“We’re still not seeing the kind of mass exodus from off the sidelines to the ranks of the employed that we thought we might be getting this summer,” said Curt Long, chief economist at the National Association of Federally-Insured Credit Unions.

More than 3 million people have dropped out of the workforce. Long-term unemployment is high and rising.

“We do still have a long slog, and it’s going to be some time before we get all these folks back integrated into the labor market,” Long said.

And there are some high hurdles in the way of getting back to “full employment,” pre-pandemic style.

Hotels, bars and restaurants are still down more than 2 million jobs. And we’re still in the hole in education, government, business services, manufacturing and retail.

And while 150,000 of them came off the sidelines to reenter the labor force last month, only 3% found jobs, and the rest now count as unemployed. “There’s still a lot of work to reabsorb, to bring back women,” Martin said.

Some fundamentals in the labor market may have shifted, said Brad McMillan at Commonwealth Financial — people taking early retirement, staying home with kids or deciding not to take low-level jobs unless they pay enough to live on.

“The number of people in the labor force as a proportion of the jobs is steadily decreasing. And that means there won’t be this excess supply of labor that employers have really grown to rely on over the past several decades,” McMillan said.

And that means employers might have to work harder, and pay more, to get the workers they need.