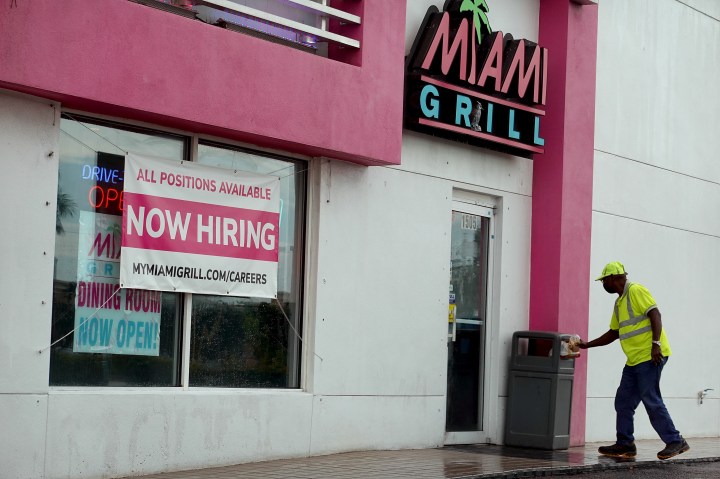 A Now Hiring near the entrance to a Miami Grill restaurant on September 21, 2021 in Hallandale, Florida. Joe Raedle/Getty Images

A Now Hiring near the entrance to a Miami Grill restaurant on September 21, 2021 in Hallandale, Florida. Joe Raedle/Getty Images

The number of Americans applying for unemployment benefits rose for the third straight week, a sign that the highly contagious delta variant may be slowing a recovery in the job market.

Claims rose unexpectedly by 11,000 last week to 362,000, the Labor Department said Thursday, though economists had been expecting claims to go in the opposite direction. The four-week moving average of claims, which smooths out week-to-week ups and downs, rose for the first time in seven weeks to 340,000.

Since topping 900,000 in early January, applications had fallen fairly steadily as the economy bounced back from last year’s shutdowns. But they’ve been rising along with coronavirus infections.

The applications, which are a proxy for layoffs, remain elevated: Before the pandemic hit the United States hard in March 2020, they were typically coming in at around 220,000 a week.

America’s employers have rapidly increased their hiring since they slashed 22 million jobs in March and April 2020 as the coronavirus outbreak — and the shutdowns meant to contain it — brought economic activity to a near-standstill. Since then, the economy has recovered about 17 million jobs as businesses to open or expand hours and Americans to return to bars, restaurants and hotels.

But hiring, which has averaged more than 585,000 jobs a month this year, slowed to just 235,000 in August as the delta variant disrupted the recovery. Restaurants and bars cut nearly 42,000 jobs last month, the first drop this year. Hiring is expected to pick up to more than 560,000 this month; the Labor Department issues the September jobs report next week.

In a research note, Contingent Macro Advisors said that technical factors — seasonal adjustments and processing backlogs in California, where claims soared by nearly 18,000 — were responsible for last week’s increase in filings. “Overall, the jump in claims in the last three weeks bears close watching but is not yet alarming,″ Contingent said.

Altogether, 2.8 million Americans were receiving some type of jobless aid the week of Sept. 18, down by 18,000 from the week before. Earlier this month, the federal government stopped additional aid — including $300 a week on top of traditional state benefits — that was meant to ease the economic impact of the pandemic.