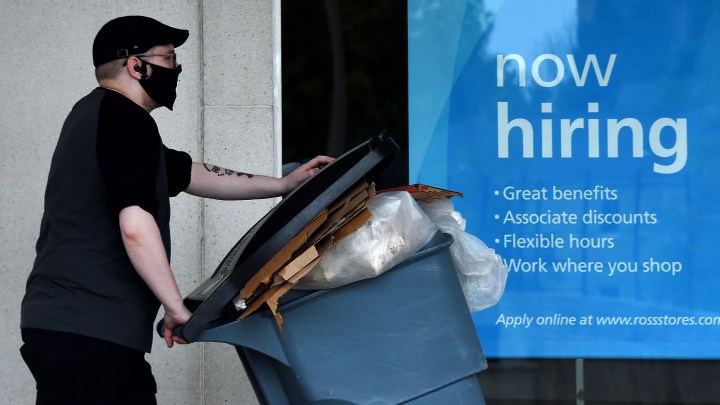 COPY
A "now hiring" sign at a business in Arlington, Virginia. Hiring is sluggish across the economy and economists worry that the trend will turn negative. Olivier Douliery/AFP via Getty Images

A "now hiring" sign at a business in Arlington, Virginia. Hiring is sluggish across the economy and economists worry that the trend will turn negative. Olivier Douliery/AFP via Getty Images
Listen Now

The American economy added 245,000 nonfarm jobs in November, far fewer than the 610,000 the month before, according to the U.S. Labor Department.

Unemployment fell a tad, to 6.7%. But most of that drop occurred because about 400,000 workers left the workforce.

The number of adults not in the labor force, which refers to people who are neither working nor actively seeking work, rose by 560,000. The number of Americans who are currently not working but say they want a job was 2.2 million higher than it was in February.

The areas that saw job gains were in warehousing and transportation.  The losses came primarily in retail and government positions.

And even though November did show some increase in payrolls, the overall employment picture is alarming because improvement in the job market is slowing way down.

We were adding jobs twice as fast just a month earlier, in October, said economist Joseph Brusuelas at RSM Consulting.  He explained it with some complex math terms: “What we call a first derivative-second derivative problem. First derivative looks strong.”

So that first derivative is the 245,000 jobs the economy added in November.

In other words, if employment growth keeps decelerating, the American economy could be losing jobs by next month.

Even if we kept up with November’s pace, full recovery is going to take a very long time, said economist Daniel Zhao at the job site Glassdoor.

And, according to Lisa Rowan at Forbes Advisor, digging out of this unemployment hole is about to get harder because of rising COVID cases, government shutdown orders and mounting business failures. And government relief will soon expire.

The latest Forbes Advisor-Ipsos poll finds that half of American workers are now afraid they or someone they know will lose their job in the next six months, which could put even more downward pressure on the economy as a whole.