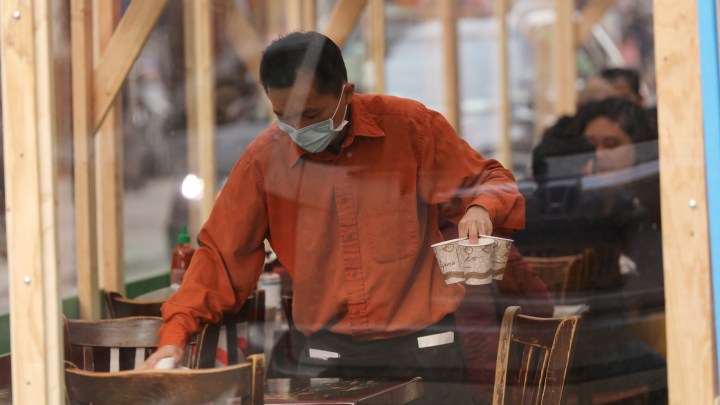 COPY
A waiter at the outdoor dining area of a restaurant in New York last year. Spencer Platt/Getty Images
COVID-19

A waiter at the outdoor dining area of a restaurant in New York last year. Spencer Platt/Getty Images
Listen Now

The last jobs report for 2020 is out Friday morning, and the results are not good. The U.S. economy actually lost 140,000 jobs in December instead of making modest gains as forecasted. It’s the first month of job losses since April 2020, interrupting a recovery.

But, with vaccines slowly starting to roll out, and the money from the recent $900 billion COVID relief package starting to make its way into the economy, could we start seeing some better jobs news in January?

The short answer is not yet. The biggest reason is that the U.S. is still setting records for new COVID infections and deaths.

“I think that that’s the biggest determinant, frankly. What’s the virus doing?” said Erica Groshen, an economist at Cornell University.

Groshen said that as long as so many people are staying home, we just aren’t going to see a lot more rehiring or new jobs.

“We’ve sort of reached a plateau, I would say, that is not going to look a lot better until the vaccine reaches a whole lot more people,” she said.

In the meantime, the latest COVID relief package will have a positive effect on the economy as soon as this month, said Heidi Shierholz, at the Economic Policy Institute.

“Without that stimulus package, over 10 million people would have lost unemployment insurance benefits at the end of December,” Shierholz said. “That would have been a huge drag on the economy that we will not see.”

And, with the Democrats soon to be in charge, Shierholz said there is likely more relief on the way.