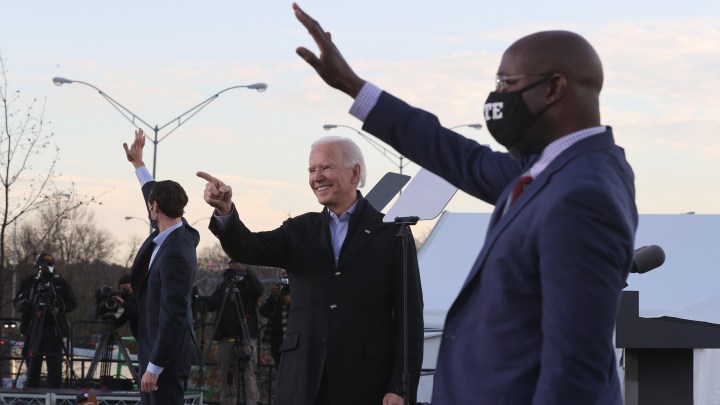 COPY
Jon Ossoff, left, and Raphael Warnock campaign with President-elect Joe Biden in Atlanta. With the victories of Ossoff and Warnock, Democrats will control the Senate. Chip Somodevilla/Getty Images

Jon Ossoff, left, and Raphael Warnock campaign with President-elect Joe Biden in Atlanta. With the victories of Ossoff and Warnock, Democrats will control the Senate. Chip Somodevilla/Getty Images
Listen Now

Democrats have clinched control of the U.S. Senate. With 50 Democrats and 50 Republicans in the chamber, Vice President-elect Kamala Harris would have the tiebreaking vote.

With one party in charge of the White House, the House of Representatives and the Senate, it’s less likely that disagreement becomes deadlock, as it did for so much of the past four years.

Said Wendy Edelberg, director of the economic policy development group the Hamilton Project: “We can avoid those sorts of really inefficient, painful negotiations.” Democrats will not have a filibuster-proof majority, but they would control the Senate’s agenda, and, Edelberg said, “they can be more nimble. They can move faster and be bolder.”

A unified Democratic government would be able to create significant economic change. In the short term, that likely means more stimulus spending targeted at Democratic priorities.

Jon Lieber, a managing director with the Eurasia Group, said, “You’d see a lot more aid to state and local governments. You’d probably see a refresh of these broad stimulus checks that have gone out now twice, and I think  you’d get a much more generous unemployment benefit that would last easily into the summer and probably beyond that.”

But the proposed $2,000 relief checks might not make it even under the Democrats, according to Scott Brown, chief economist at investment firm Raymond James.

“Most economists would just throw up their hands and say this is not really effective stimulus. There are much better things to spend money on, including giving money to the unemployed,” he said.

Longer term, a Democratic sweep means policy choices that will come with higher price tags, Lieber said. “Tax increases which were designed to finance spending increases for health care, education and green energy. Those factors, over the long run, probably start to be a drag on growth as tax increases and new regulations kick in.”

In addition, Democrats might turn their attention to tax collection itself. Bill Gale is a senior fellow at the Brookings Institution. “I think you’ll see resources devoted to the IRS to reduce tax evasion and improve the management of the tax system,” he said.

Democrat-backed tax hikes would most likely be borne by wealthier Americans and corporations or come in the form of capital gains levies aimed at higher income brackets. But, Gale said, there will likely be no hint of tax increases until well after the coronavirus pandemic is over.