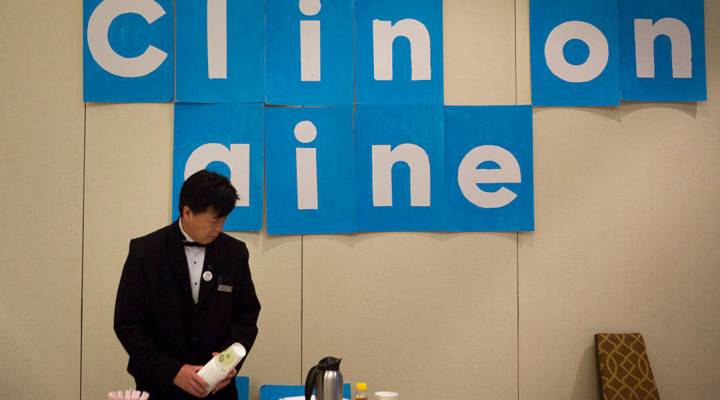 Donald Trump’s surprise victory, plus the GOP holding on to House and Senate majorities, means the Democrats will be in a tough spot come January.

Without control of the White House or either chamber of Congress, Devine said the Democrats will have a lot of trouble advancing their economic priorities, so they’ll have to go on the defense.

“The Democratic Party will have to come together in principled opposition to President Trump and constant opposition to him…. We cannot allow him to begin to implement the policies that he advocated,” said Devine, citing Trump’s plans on taxes and national security.

For his part, President-elect Trump is promising to work with everyone, even making an unusual overture in his victory speech.

“For those who have chosen not to support me in the past, of which there were a few people, I’m reaching out to you for your guidance and your help so we can work together and unify our great country,” the president-elect said after it was clear he won the election.

Even defensively, however, Democrats will have limited options to shift economic policy, much less set an agenda.

“The Democratic Party is not going to have much to say,” said David Karol, who teaches government and politics at the University of Maryland. “In the Senate, the minority still retains the right to filibuster, but you can’t filibuster the budget resolution, and a lot can be packed into the budget.”

But there’s always Washington’s favorite pastime — dealmaking. Trump still isn’t on the best of terms with many of his Republican colleagues, so there could be an opportunity for Democrats to pick off members of Trump’s own party.

“It is not clear that the moderate Republicans will actually go along with some of the more extreme stances with Trump,” said Sharyn O’Halloran, who teaches politics and economics at Columbia University. Since the Democrats have so little power, she said they have a lot of incentive to reach across the aisle.

“And therefore, you may be able to have a coalition between the Democrats as well as the moderate Republicans, pushing the more extreme Republicans to the wings,” O’Halloran said.

Those kinds of coalitions, she said, could open the door for Democrats to negotiate with Trump once he’s in office, something that will be critical on contentious votes and presidential appointments that help shape the U.S. economy.

“The best that they will be able to do is to limit the damage, and — where they can — try and keep the government functioning,” said O’Halloran of the Democrats. “And I think that’s going to be one of the key goals, to make sure that the government does continue to function and that they can be seen as responsible … and then they look to the next election.”

Because, for political parties, it’s never too early to start thinking about the next campaign.