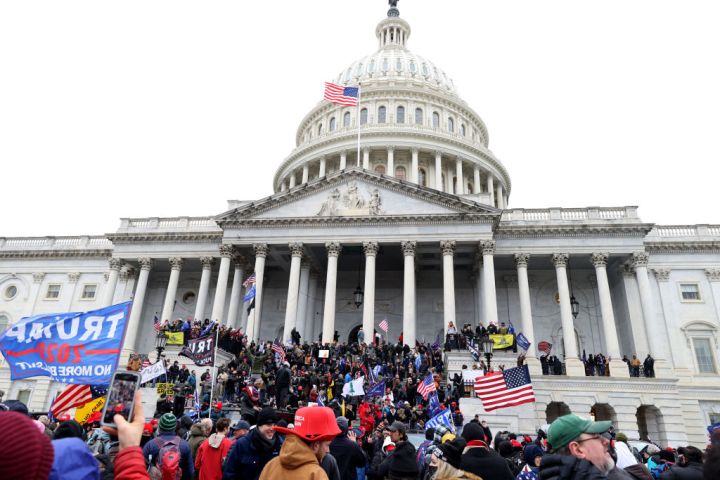 COPY
Protesters loyal to Donald Trump at the U.S. Capitol building on Jan. 6, 2021. The nation's political instability, said Wendy Edelberg of Brookings, "makes me nervous for the year ahead." Tasos Katopodis/Getty Images

Protesters loyal to Donald Trump at the U.S. Capitol building on Jan. 6, 2021. The nation's political instability, said Wendy Edelberg of Brookings, "makes me nervous for the year ahead." Tasos Katopodis/Getty Images
Listen Now

The insurrection at the Capitol on Jan. 6, 2021, has raised many questions about the state of democracy in the United States. But what about the economy?

“Marketplace” host Kai Ryssdal spoke a year ago to Wendy Edelberg, director of the Hamilton Project and a senior fellow at the Brookings Institution, as protesters were storming the building where the House and Senate hammer out legislation. On this anniversary, he revisited their discussion of how the events of that day might reverberate through the economy.

The following is an edited transcript of the conversation. To listen to the interview, use the media player above.

Kai Ryssdal: So, I went back and I listened to our conversation from a year ago today, and, look, we were all shocked. But you were concerned, I think, about what the events of this day a year ago were going to mean for the American economy. And I imagine you’ve been thinking about it since. Where are you on that?

Wendy Edelberg: Yeah, I listened to that interview as well, and I sounded pretty shaken up. Last year at this time, I was worried we were seeing evidence that political instability could derail the recovery. And we have certainly seen ways that it slowed the recovery: vaccine hesitancy, not taking the necessary steps to make sure that schools and workplaces are safe, coming to the precipice on a debt ceiling crisis. Those problems have led to fits and starts in this recovery.

Ryssdal: We talked about the rule of law and how essential it is to making this economy work, and I don’t know that we’re seeing yet the economic impact of the tearing down of rule of law that the 6th of January represents. Do you?

Edelberg: Yes, that’s, it’s not my area of expertise, but I certainly think a lot of the implications are still ahead of us. I think that it’s going to influence the conversation that we have over the next year going into the midterms and how we govern ourselves when we don’t have united government.

Ryssdal: Well, let me get it to your area of expertise then, and put it in the language of finance and economics and business: “stability,” “confidence,” “trust” and “regulation.” Those kinds of things seem to have been — a year ago — in peril. And to your point, I guess the biggest effects are yet to come.

Edelberg: I mean, one of the most concrete examples of how unhelpful these sorts of problems are is the debt ceiling crisis. We came up to the precipice of an all-out crisis for no good reason other than political chaos. There was no bargaining going on. It was simply creating chaos that was completely preventable.

Ryssdal: One of the things you said a year ago was, “This happened. You can’t unring this bell.” And I wonder if the Republicans, in trying to memory-hole the lying and the deceit and the violence, are actually succeeding in unringing the bell.

Edelberg: That’s a, that’s a depressing thought. There’s a very “1984” aspect to that. It’s very unnerving. The reason I keep thinking about how this is going to affect the year ahead is because it had everything to do with our election process and [the] change in power from one political party to another political party. And so, yeah, it makes me nervous for the year ahead. I do think our country has an amazing ability to forget, [but] it would surprise me if we forget this.

Ryssdal: I wonder if it’s too soon to understand the economic legacy of the 6th of January 2021?

Edelberg: I think it is too soon, and it will be colored by everything that’s happened to the economy because of the pandemic. So much is good about the recovery. Over the last year, we’ve seen real wage growth for the lowest-wage workers. We’ve seen a very strong labor market, stronger household balance sheets, a big decline in the poverty rate, which is partly a result of policies that were enacted over the last year. And at the same time, we’re still in the midst of chaos. We have a disruptive composition of consumer spending. Real spending on goods is 9% above [pre-pandemic trends]. The goods sector is buckling under the pressure with goods price inflation running [high]. So I’m not sure how we’re going to disentangle how much is a result of our political process, how much is a result of the pandemic and, indeed, how those two things have been completely intertwined.