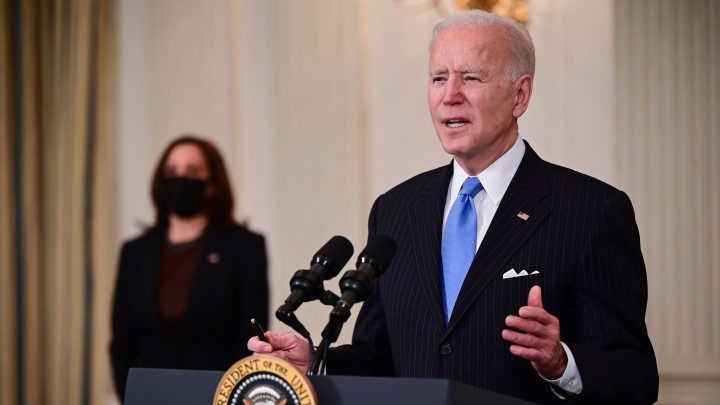 Lawmakers continue to debate over who should qualify for a third round of stimulus checks, with Democrats now agreeing to a stricter eligibility limit.

In comparison, the first two checks had a wider range of incomes that were eligible to receive any form of check. At a 5% phaseout rate, your payment was reduced by $5 for every additional $100 in income you made above the threshold.

Howard Gleckman, a senior fellow at the Urban-Brookings Tax Policy Center, explained to Marketplace that these phaseout rates are aimed at reducing tax “cliffs.” It wouldn’t seem fair, for example, to receive $1,400 if you made $75,000, but get excluded entirely if you made $75,001.

Biden and Senate Democrats agreed to these stricter caps to appease the more moderate members of their party.

West Virginia Senator Joe Manchin, who has referred to himself as a “moderate conservative Democrat,” had wanted the thresholds for the full checks set even lower at $50,000 for individuals. He and Republican Sen. Susan Collins of Maine spearheaded a proposal last month that would end these checks entirely for individuals making above $75,000 and couples making above $150,000.

Meanwhile, the House passed a COVID-19 relief bill last week with looser guidelines than the Senate’s new plan.The $1,400 checks would be sent to individuals making $75,000 a year and married couples making $150,000. The amounts would gradually decrease, ending for individuals who make $100,000 and couples who make $200,000.

Progressive members of the Democratic party like House Rep. Alexandria Ocasio-Cortez have criticized the limits set by Biden and the Senate.

Ocasio-Cortez recently tweeted that this means the Biden administration will have sent less generous relief checks than the Trump administration, adding that “it’s a move that makes little-to-no political or economic sense.”

The left-leaning Institute on Taxation and Economic Policy has analyzed how many people would get help under the Senate caps, and found that 86% of adults and 85% of children would.

However, the ITEP pointed out that 280 million people would still reap benefits.“Among the bottom 60% of Americans, those who most need help, both versions of the proposal would benefit 100% of adults and children,” according to Steve Wamhoff, ITEP’s director of federal tax policy.